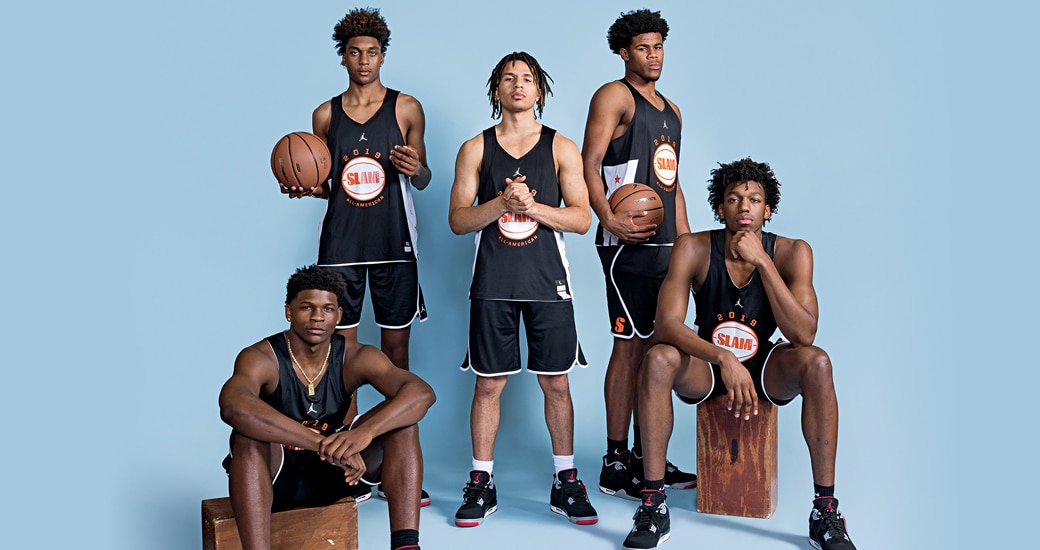 We spent an afternoon with the top seniors—James Wiseman, Vernon Carey Jr, Jaden McDaniels, Cole Anthony and Anthony Edwards—for our annual photo shoot. Get to know the future of the game below.

Slated to reunite with his former HS coach Penny Hardaway—with whom he won a state HS championship just last year—at the University of Memphis this fall, the Gatorade and Morgan Wootten National Player of the Year led the Mustangs to a 25-9 record and a trip to the state Class-AAA championship game once again. He averaged over 25 points, 14 rebounds and 5 blocks per game as a senior.

The future Blue Devil led the Sharks to consecutive Class 5A state championships the past two years, including a 27-5 record this season, where he averaged 21.1 points, 9.0 rebounds and 1.1 blocks per game. His elite résumé goes beyond just his high school season accomplishments, having claimed two gold medals with Team USA, including earning tournament MVP at the 2017 FIBA Americas U16 championship.

The Seattle metropolitan area native helped lead the Eagles to a 26-3 record and a third-place finish in the Class 4A state tourney this past season. McDaniels averaged 23.2 points, 10.3 rebounds, 3.2 assists and 2.1 steals per game. He was subsequently named the Class 4A Player of the Year, the North Puget Sound League MVP and a two-time First-Team All-State honoree.

A New York City native, Anthony transferred to legendary national prep powerhouse Oak Hill for his senior year. Although the Virginia program has seen the likes of Jerry Stackhouse, Carmelo Anthony, Kevin Durant, Rajon Rondo, Brandon Jennings and Josh Smith don its uniforms over the years, Anthony became the first player in school history to average a triple-double (19.0 points, 10.5 assists, and 10.1 rebounds) in the regular season.

On February 11, Anthony Edwards shocked the college world when he committed to the Georgia Bulldogs over blue blood Kentucky. According to ESPN’s recruiting database, he became the highest ranked high school prospect to ever commit to the Athens school as well as the first five-star prospect to ever choose the program. Having reclassified up from the Class of 2020 to 2019 last November, he averaged 20.4 points, 5.5 rebounds and 4.0 assists last summer in AAU ball.