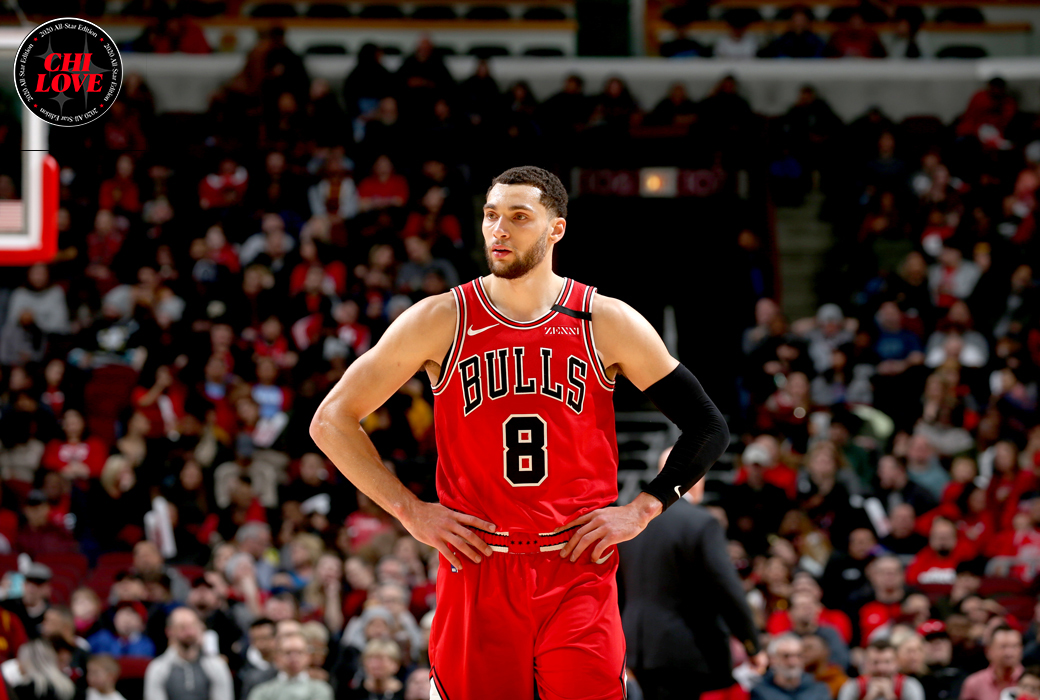 The merchandise mart in downtown Chicago is the largest privately held commercial building in the United States. It’s a building so damn big, it literally had its own zip code until 2008. The south side of the Mart overlooks the Chicago River, where tour boats float past year-round, kayaks come out in the summer and the water’s dyed green for St. Patrick’s Day. On the north side of the Mart, in the shadow of the El train between Franklin Street and Wells Street, there’s a famously delicious, but eminently inconspicuous speakeasy-style steakhouse called Bavette’s.

This is one of Zach LaVine’s favorite restaurants in Chicago. You might find him ordering a steak here on an off-day, if he isn’t at home playing video games with his boys or out catching a movie with his girlfriend. Since arriving in a 2017 Draft-day trade in exchange for Jimmy Butler, the Seattle native has made the Windy City his home—and we know this, because he knows about Bavette’s.

The streetwise Bulls star won’t turn 25 until March and yet, in his sixth season, he’s an elder statesman on a roster that features only two players (Thaddeus Young and Otto Porter Jr) with more years of NBA experience. “It’s just how the NBA works now,” LaVine points out, “but it is kinda weird saying that I’m a veteran.”

With a 19-33 record as of this writing, the Bulls look unlikely to seriously contend for a playoff spot in 2020, but LaVine is still having a great season. Yes, the out-of-this-world dunks are what he’s recognized for around the globe, but with the newfound responsibility of being the lead dog in Chicago, he’s worked on his D, his shooting and his leadership to round into much more than just a dunker.

To go along with a career-best 24.9 ppg in this, his third season with the Bulls, LaVine is averaging 4.9 rpg and 4.0 apg. Not to mention his alien-type bounce and that je ne sais quoi silkiness to Zach’s game that makes it look like he’s hardly breaking a sweat when he’s lighting someone up for 30+, often with a dazzling mix of long-range bombs and twisting finishes at the rim.

“As easy as it looks on TV, it’s that easy,” Bulls teammate Shaq Harrison says with a laugh. “It still amazes me how easy it is for him.”

It’s a Saturday afternoon in January, about a month before NBA All-Star Weekend descends on Chicago, and last night was one of those nights for LaVine: he erupted for 43 points against the Pacers, albeit in a loss. “I can’t say it enough, Zach LaVine is a problem,” Dwyane Wade tweeted afterward. “I can’t wait to watch him over the next few years blossom.”

The team landed in Detroit around 1:30 a.m., so LaVine slept in before heading down to the hotel restaurant for lunch. A few hours from now, he’ll lead the Bulls to a much-needed win over the Pistons with a game-high 25. In between bites of salmon and rice, LaVine reflects on the evolution of his game, how he’s matured since entering the NBA as a teenager, and what it’s like to play every home game in the stadium that MJ built.

SLAM: How have you changed as a person since entering the NBA?

ZL: Tremendously. Coming into the NBA at a young age, at 19, the League grows you up. You can still be a kid, but you’re dealing with grown men, and you’re trying to be a professional. I feel like I’m in a different place now. I’m still young, I’m 24, I don’t have any kids, but I’ve got a really stable relationship, me and my girlfriend. I feel like a more mature person, not just with basketball, but in my personal life.

SLAM: What did you struggle with in your first few years in the League, looking back?

ZL: It’s all just learning experiences. There’s growing pains, there are ups and downs, especially as a rookie or in your second year. Playing the point guard position my first two years helped me out a lot. I don’t think I was, conventionally, an extremely good point guard, but it helped me make reads, helped me learn what to do with the ball. Me playing both point guard and shooting guard now, I feel like that experience helped me.

SLAM: How did you handle being traded from Minnesota to Chicago as a 22-year-old?

ZL: I had some help. My family is a big part of who I am and what I do. My dad was a professional football player [Paul LaVine played briefly with the Seattle Seahawks in the late ’80s. —Ed.], he’s been through the pro life, so I was a step ahead coming in, and I’m thankful for it. I understand it’s part of the business, and that it didn’t work out in Minnesota, even though I pretty much blew up there. But you understand how basketball works with trades and free agency and stuff like that. I was welcomed with open arms in Chicago, and I’m trying to do the best I can here.

SLAM: Your dad became an internet sensation last summer when you posted a video of him coaching you in a workout. How did he react to going viral?

ZL: He gets mad at me when we record sometimes. He was like, “Man why are you always making me look crazy?” He’s such a funny dude, he acts like that 100 percent of the time. My girlfriend was recording what we were doing, it’s just organic, that’s how we interact. He talks a lot, but that’s my best friend in the world. We’ve been through a lot together.

SLAM: On the court, what’s different about playing with the Bulls now as opposed to your first three years in Minnesota?

ZL: It was just a different type of opportunity coming here, being able to be a premier guy, a No. 1 option. In Minnesota, it was me, Karl [Anthony Towns] and Andrew [Wiggins]. I had to play a role—some games I was able to showcase my talents, but I was pretty much the third option, and I had to play my role on the team, and you have to understand that when you’re on a team. But I think here, I’m able to show my entire game.

SLAM: What would you say is the best part about playing in Chicago?

ZL: It’s just such a historic franchise. We’re in a little bit of a downslope right now, we started the rebuilding process and right now we’re underachieving to what we thought our goals for the year were. But it’s a great opportunity to help get this franchise back to a place where it should be—a top-3 franchise, a top-3 market in the world. The fan base here is incredible. What’s not to love? It’s a great city.

SLAM: What’s it like to look up in the United Center every night and see No. 23 hanging in the rafters?

ZL: That’s the best player ever. It’s inspiration to me. I feel like everybody in my generation was a big Michael Jordan fan. I watched all his videos—Michael Jordan’s Playground, His Airness—all those different VHS movies that kids don’t know about nowadays [laughs]. When I grew up, when I was a little kid, it was on a VCR, so we’d pause or rewind it and then go outside and try to do the same dunks, re-enact it. I think that’s what makes basketball so cool—there’s so many different things that can inspire you when you’re younger.

SLAM: How do you react when you hear people say you’re “just a dunker?” Does it bother you?

ZL: If you’re in the NBA, I think you know what I’m about. It’s funny, I remember this from when I was younger with Vince Carter. It’s just how fans see you. We’re not a team that’s on ESPN every day. We have some ESPN games, but the only time that global, regular fans are seeing you is the Dunk Contest. I don’t blame anybody, it’s not a bad thing to be known as [laughs]. People still don’t really understand how good Vince Carter was, or Dominique Wilkins, dudes that scored 26-27 points a game—All-Star, All-NBA guys. Because when you think of Vince Carter, you think of the Dunk Contest. It’s a little unfortunate, but I know what I’m about. I know how good I am. I know how much work I put in during the offseason. I don’t go out here and just dunk the basketball, it’s just one facet of my game. But I enjoy putting on a show for the fans.

SLAM: What career goals have you set for yourself?

ZL: I want to be a winning player first. I want to be in the playoffs. With that comes the All-Star selections, the All-NBA selections, being in the MVP conversation. I think it’s the same goals for most players, it’s just—can you achieve them?

Abe Schwadron is a social editor at FanDuel and former Senior Editor at SLAM.