With a Little Help

One of the things that make basketball the best sport in the world is its versatility. You can play with 10 people, six people, two people. Real games, shooting contests, handling competitions. The only real way to get any better, however, is by hitting the court by without anyone else around.

That’s where the love for the game is developed. Hours and hours of solitary shooting. Running gameplay scenarios in your head, darting from side-to-side so that you can play the part of the defense and the offense as the imaginary clock winds down.

But as you’re celebrating with your hands in the air, basking in the (fake) arena’s cheers, that ball’s already halfway across the court, rolling away with a mind of its own. And you can only cover so much ground with spinning the ball to yourself and throwing it off the backboard.

As a veteran of long hours at the park and in the backyard by myself, I know how quickly the momentum of drilling shots can be undone when the ball takes an awkward bounce.

So the last time I went to the park by myself, I put the SKLZ Solo Assist training tool under the basket. I found the right positioning for both myself and the Solo Assist and before long, it was like John Stockton himself was delivering pinpoint passes off my makes. 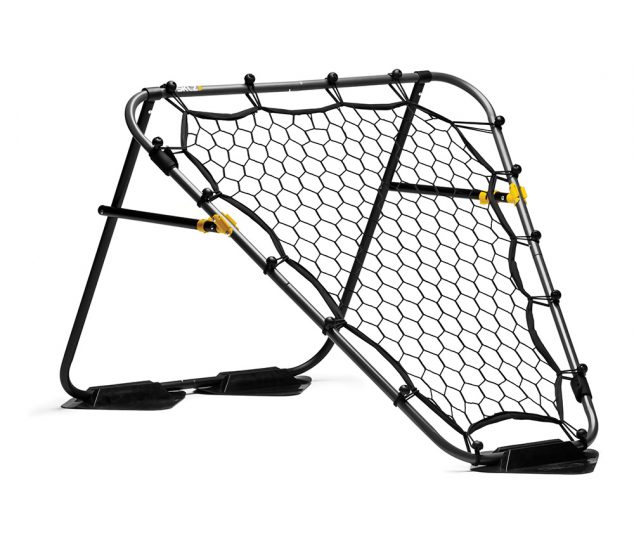 Like the game it’s designed for, the Solo Assist has a bunch of versatility. After my midrange game had reached Alex English-like-levels, I moved the Solo Assist across the court, so that I could get the heart pumping. I put it on the left side of the lane, and threw the ball against the Solo Assist’s mesh netting, running to catch up with the lead passes it was feeding me. For the most part, it made up for poor passes on my part and it continued to put the ball in my right hand so I could get my Kyrie layups going.

I wanted to see exactly how responsive the Solo Assist would be, so then I tried to run some dribble-handoff stuff. When you run off a screen or are on the receiving end of a dribble-handoff, you want to make contact between your shoulder and your teammate’s shoulder. It makes it more difficult for the defense to guard you in such tight space.

I got as close as I could to the Solo Assist and bounced the ball off the net. To my surprise, the ball didn’t jump off into the air. It landed softly back in my hand about a foot and a half from where I originally bounced it from. It then acted as a screener so I could workout like Chris Paul coming off the pick-and-roll.

The final test had to be the game-winner. Of course.

Anybody who’s used a New York City park to work on their game has used a trash can at one point or another. It can be the defense, your teammate, a way to put nets on rims that don’t have one.

I needed someone to guard me (get buckets put on them), so I tipped the trash can over, emptied it out and put it at the top of the key. I put the Solo Assist behind it, close to the right baseline.

Bang, bang, bang, I hit that garbage can with a triple right-to-left cross and threw the ball at the Solo Assist.

Three… two… the ball landed in my hands on the left side of the court with one second left. Game-winner.