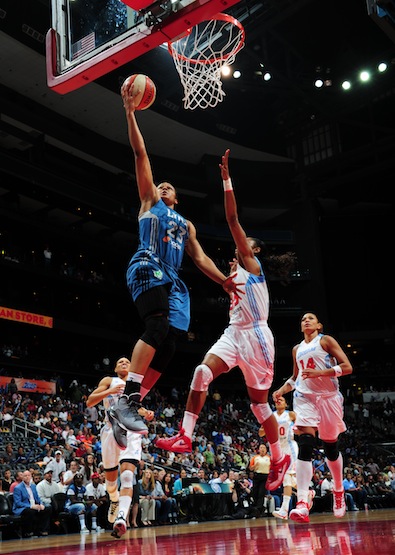 The WNBA regular season tips off tonight with a matchup between the Los Angeles Sparks and Seattle Storm. As a new feature here at SLAMOnline, we will be doing a weekly power rankings of the WNBA teams. Agree or disagree with the rankings, let me know in the comments below or give a follow on Twitter @stephenlitel to discuss.

With that being said, let’s take a look at the first 2012 WNBA power ranking:

1. Minnesota Lynx
The reigning champs only got better in the off-season, bringing everyone back from their championship squad except for Charde Houston and Alexis Hornbuckle. In their place comes rookie Devereaux Peters and veteran Erin Thorn. They ran through the League during both the regular season in 2011 and are clear favorites to bring home the title again in 2012, believing only the injury bug could stop them on their “road to repeat.” The top spot is theirs until other teams show they are capable of dethroning the champions.

2. Connecticut Sun
Last year, the Sun showed they have the talent to play with any team in the WNBA and are definitely a team with a promising future. Well, the future begins now and they must take the next step in their development as a championship-contending squad by learning how to win on the road. They have that ultimate mix of young talent—like Tina Charles, Renee Montgomery and Kelsey Griffin—to go along with veteran leaders who can still play at a high level, such as Kara Lawson and Olympian Asjha Jones.

3. Indiana Fever
Losing Tangela Smith hurts, but the Fever were able to get even deeper with the additions of Roneeka Hodges and rookie Sasha Goodlett. This is a veteran team that knows how to win in the WNBA consistently and also know how to utilize the Olympic break to their advantage. After all, this is a team that may very well have represented the Eastern Conference in the WNBA Finals last year had it not been for an injury to the reigning MVP Tamika Catchings.

4. Seattle Storm
When you think of the WNBA postseason, the Seattle Storm come to mind. Winning two titles and looking to play in the Playoffs for a record ninth straight year, the Storm have challenges in doing so, but are also a veteran team who knows how to win. Trading away Swin Cash and Le’Coe Willingham was a tough call, but having the opportunity to bring in Tina Thompson will help while Lauren Jackson sits out. Coach Brian Agler always seems to get the most out of his team when everyone is doubting them, like some are doing entering the year without Lauren Jackson, but don’t ever bet against Agler and his point guard, Sue Bird.

5. Los Angeles Sparks
It was an excellent off-season for the Los Angeles Sparks. They added a ton of talent to their team, such as Alana Beard, Nicky Anosike, Marissa Coleman and the No. 1 in the Draft, Nneka Ogwumike and, on paper, should have a great season. There are two questions surrounding this team heading into the year though. First, can they stay healthy? All indications from camp are that Alana Beard looks ready to regain her place as one of the best perimeter players in the WNBA, but has a health history that is well-documented. Obviously, this team revolves around Candace Parker, who also has her own injury history. Second question is how consistent can their point guards—Kristi Toliver and Sharnee Zoll—be this year?

6. Phoenix Mercury
Losing Penny Taylor is huge, but the Mercury, like Seattle, know what it takes to win in the WNBA. They have plenty of players capable of stepping up and doing their best to make up for the loss, most notably DeWanna Bonner and new addition Charde Houston, who should fit in very well with Phoenix’s style of play. Some question the depth at point guard heading into the year, but with how much Diana Taurasi handles the ball, the transition should go smoothly, especially for rookie Sammy Prahalis. To doubt this team due to Taylor’s loss for the season, especially with how easily they score the ball, would be a big mistake.

7. Atlanta Dream
The Dream has represented the Eastern Conference in the WNBA Finals the past two seasons, but have been unable to bring home the hardware. This season will be a great challenge without Alison Bales, who retired, and Erika de Souza, who is out for the Olympics. Already a team that likes to run, Angel McCoughtry and company added Ketia Swanier and rookie Tiffany Hayes. This will be a team who looks to run even more and should have a lot of success because of their depth on the perimeter, but if games slow down to a halfcourt game, they will have some issues.

8. San Antonio Silver Stars
In last season’s playoffs, the San Antonio Silver Stars were the only team to post a victory against the Minnesota Lynx. They followed up another solid season in 2011 by improving their roster by bringing in Tangela Smith, Shameka Christon and front-runner for Rookie of the Year Shenise Johnson. The problem San Antonio faces is they play in the Western Conference, which is stacked. This feels like another typical season for San Antonio, where they are up and down all season, fighting for a playoff berth right down to the wire. This is a team overlooked by many because they don’t have the same big-name players as Minnesota, Seattle or Los Angeles—outside of Becky Hammon, of course—but the Stars are a really good team and one to watch all year.

9. Chicago Sky
With the additions of veterans Swin Cash, Ticha Penicheiro, Ruth Riley and Le’Coe Willingham, center Sylvia Fowles finally has more help. After a solid rookie season, one which brought an All-Star nod, from Courtney Vandersloot, the Chicago Sky seem poised to finally reach the postseason. They upgraded their roster significantly, but how quickly do they find their style of play and mesh on the court? With the championship-winning veterans on the roster accustomed to winning games, if they find the ability to work together, they will be scary heading into the 2012 playoffs.

10. New York Liberty
This was a playoff team in 2011, winning a game against the Indiana Fever. Cappie Pondexter is an amazing talent, but she needed more help heading into 2012. The Liberty did little to improve their team in the off-season, even raising eyebrows by drafting Kelley Cain as high as they did. Kara Braxton had a remarkable preseason—averaging 18 points and 11 rebounds—and if she can continue that throughout the regular season, the Liberty will compete for a playoff berth right down to the wire.

11. Washington Mystics
Without question, the Mystics improved in the off-season, adding players such as Noelle Quinn, Michelle Snow, Ashley Robinson and drafting Natalie Novosel. Crystal Langhorne looked amazing in the preseason, averaging 14 points and 10 rebounds, but one of the biggest reasons for hope is the return of Monique Currie, who averaged 15.5 points in the preseason after missing most of last season. This team will be better this season, but it’s very difficult to see a playoff berth with the level of teams ahead of them in the Eastern Conference.

12. Tulsa Shock
No Cambage is a shame, but things still look up for the Tulsa Shock. Make no mistake, they are still going to be one of teams in the WNBA which struggles the most, but they have taken that first, most important step. They have a coach they want to listen to and play hard for at all times. They have an incredibly young team and individual players are working towards improving their personal game while helping the team compete. After all, the elder statesman on this team now is Temeka Johnson. Rookies Glory Johnson and Riquna Williams will add some excitement to the games and hope for the future.

Let the debate begin, WNBA fans. Which teams do you believe are too high or too low on this list?