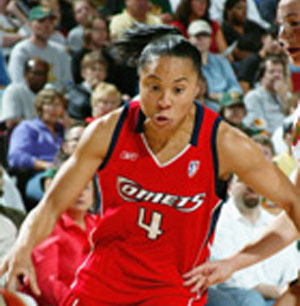 Adrienne Goodson, SLAM story subject during her all-star career in the ABL and WNBA, reached out recently about doing some writing for the mag and the website. Adreinne knows the ins and outs of the WNBA as well as anyone, so we figured that’s where she should get started. Below is her heartfelt take on the fate on her former team, the Charlotte Sting, who are no longer in business as the 11th season of the WNBA gets under way.
Here we go again. Another WNBA team gone and as the old heads say “ pour out a bottle a liquor for my divas as we begin the 2007 season with one less team, one less cheering section, one less read to achieve story, one less breast cancer awareness venue to say the least. Need I go on?

The Charlotte Sting were one of the WNBA’s eight original teams and the sister team to both the Hornets and then the Bobcats. In their first three seasons, they made the playoffs each year. Believe it or not, this was pre-Dawn Staley [pictured]. When the Sting acquired Dawn from the ABL and added her to the already stacked up roster that featured Andrea Stinson and Vicky Bullett, all hell broke loose. In addition to being one of the first WNBA franchises, the Sting were long one of the most successful teams in the league, and here’s the reason why: Dawn Staley, Andrea Stinson, Tracy Reid, Rhonda Mapp, and Vicky Bullett had to have been the most solid players in their position during this era. D-Staley with the crisp no look passes that I was so accustomed to receiving in the ABL. Andrea Stinson breaking ankles with spectacular spin moves. Tracy Reid slashing to the basket harder than any other, while Rhonda and Vicky tossed it up inside.

We all know that a team is no good without a sixth man and well Allison Feaster fit quite comfortably in that place. Allison had the quickest release known to woman and could light it up from wonderland. She came off picks like Reggie Miller and stroked it like Ray Allen. That was a bad chick on the court.

Many came afterwards, impressive players like Tangela Smith, Sheri Sam, and Tammy Sutton-Brown but not even the records, all of the coaches, all of the players nor Bobcat Sports and Entertainment could save this folding team. Yeah! there are players that have big names and uhm…….all that’s solid on paper, but these ladies made an impact on their team and the league so here’s to you. As Heavy D would say, “ I got nutting but love for you baby.”

Here’s a video tribute I made to the Sting.