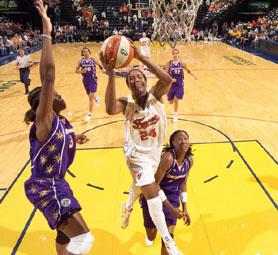 Former ABL and WNBA All-Star Adrienne Goodson introduced herself to Slamonline readers last week with a look back at the now-defunct Charlotte Sting. She’s back today with a preview of the recently started WNBA season.

Where do I begin? This had to be the busiest off season in a while. I’m not just talking about players but coaches and general managers as well. San Antonio, Los Angeles, Phoenix, Indiana, and Sacramento all made changes that will strongly impact their teams this season.

Let’s take San Antonio first. A team that I had some pretty good ties to but with all due respect……. great city, great food, great fun, no wins. I mean the effort was their in the community as usual for Spurs Sports and Entertainment. The fans cheered loud and passionately, even when the team fell short time and time again for four long seasons. The Utah chapter of Jennifer Azzi, Marie Ferdinand, Adrienne Goodson, Natalie Williams, and Margo Dydek had come to a close in 2003 and that’s when the drama began. I have to tip my hat to Coach Dan Hughes for making powerhouse moves in Texas. He single-handedly gathered Becky Hammon from New York, Ruth Riley from Detroit, and Erin Beuscher from Sacramento. Now add that to Marie Ferdinand back from maternity leave, Kendra Wecker back from a torn ACL, the emerging Sophia Young as well as veteran standout Vickie Johnson. This ones gonna be nice to watch especially if Marie buys into the program. Coach Hughes has such a diversified team and with the looks of his roster, the second team can come in and really do work. Chantelle Anderson and newly acquired Helen Darling will definitely give them a boost off the bench. And as they say in the good ole’ southwest, “Get a rope!” At 2-1 early on, the Stars look pretty good so far.

Veteran All-Star forward Taj McWilliams-Franklin was traded from the Connecticut Sun to the Los Angeles Sparks but the biggest impact to that team will be the re-emergence of Micheal Cooper. In four seasons, Micheal Cooper better known as “Coop”, managed a 116 – 31 record, earned the 2000 WNBA Coach of the Year Award, and captured back to back championships in 2001 and 2002. Damn, dude ……. I can talk about the D-League in Albuquerque and how he won that title in 2006 or about his brief return to the bench with the Lakers this season but I won’t. I’ll just sit back and watch him whip up some off his Phil Jackson-like potion. And by the way, Jack Nicholson will be there.

Phoenix and Sacramento both added key ingredients to an already tasty soup. Tangela Smith, one of the players in the Charlotte Sting dispersal draft is now making Phoenix her home this season and what a help she will be alongside last years rookie sensation Cappie Pondexter, Diana Taurasi, and newly appointed general manager, Ann Meyers. Although Sacramento held onto the same core group of players such as Yolanda Griffith, Kara Lawson, Ticha Penicheiro, Nicole Powell, Demaya Walker, and Rebekkah Brunson they eagerly awaits the return of 2005 teammate Chelsea Newton who went to the Chicago Sky for one season. Maybe Chelsea will bring some of that fire they had over there at Rutgers in Jersey this past season.

The Indiana Fever got swollen real quick with the acquisition of Tammy Sutton-Brown down low. This a plus for the Fever because now Tameka Catchings (pictured) and her 18 ppg average now have a running mate. Do I need to mention rebounds? Look out, Detroit. Indiana is not playing games.

Another title is up for grabs and once again the WNBA is set to kick off the season but this time its the eleventh year and teams are hungrier. Ain’t nobody goin’ nowhere. At least the WNBA, anyway. Not as long as you remember one key thing: “David Stern is not going to be a part of something that fails, aight?”