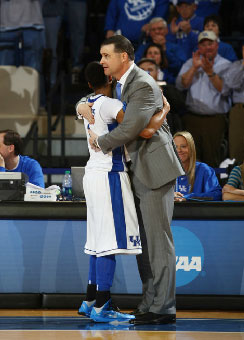 Hey SLAMonline fans! I’m excited to write my next blog for all the fans to read about the UK Hoops season. Well, if you haven’t been able to follow us we finished the regular season second in the SEC standings behind Tennessee. But we got to play the Lady Vols in the last regular-season game at our home gym in Memorial Coliseum. It was a great game for us and the fans didn’t disappoint as the game was sold out with nearly 8,000 in attendance.

We came out on top in the game, 78-65, and it was extremely special because it was my last game at UK, and it was a great way to go out on Senior Day. I’m blessed so many people came out to support us, especially my family. We got a win over Tennessee for the second straight year in Lexington, and even more cool was the win made my coach, Matthew Mitchell, the all-time winningest coach in UK Hoops history.

Speaking of all-time wins, Brittany Henderson and I are the lone seniors on this year’s squad and we will go down as the all-time winningest class in UK Hoops history. Knowing that means so much because we didn’t know what to expect coming in here as freshmen. Back then, there wasn’t a whole lot of winning going on but that has all changed. I’m glad we are a part of making history at UK and transforming Kentucky into a national powerhouse that is here to stay.

Recently I was named the 2013 SEC Co-Player of the Year, and I can’t tell you how much that means to me to receive the honor for the second straight season. It’s very humbling to get the award and just knowing that the coaches in the SEC believe in my talents and my abilities to play is really special. I have to give all the credit to my teammates because they have helped me get better every day and if we weren’t winning like we are, I probably wouldn’t have been chosen for the award. It was a team effort and I’m glad we have been showing people what we can do.

I have to give a special shout out to my teammates DeNesha Stallworth and Samarie Walker. DeNesha was selected to the All-SEC First Team and Samarie was named to the All-SEC Second Team and the All-Defensive Team. That just proves how dynamic of a team we are and how far this program has come because a lot of McDonald’s All Americans commit to Kentucky now, which didn’t really happen in the past. We currently have five on this year’s team and two more coming next season. It’s been a long process but with hard work we have gotten it done and the future looks really bright.

Now with the regular season over complete, I am looking forward to the postseason. One thing I have not accomplished since being at Kentucky is winning the SEC Tournament, and we are definitely going down to Duluth, GA, with the mindset to cut down the nets. We feel like if we play like we did the last couple of games then we should go in there and come out on top. We know we can beat anybody in the Tournament if we play our best and we feel like we are the best team. We just have to stay focused because if you lose your mental edge anybody is capable of beating anybody.

Thanks again for tuning in to SLAMonline! I look forward to checking back in with you all as March Madness heats up!