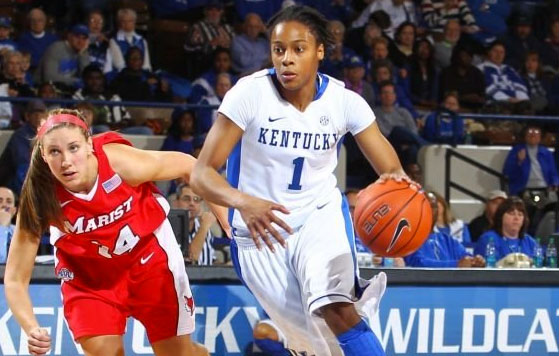 Hello SLAMonline fans. I’m back to give you the scoop on the UK Hoops NCAA Tournament status. We received a No. 2 seed in the Tournament for the second straight season, tying the school-record for the highest seed Kentucky has ever been given. We are just very excited to be in the Tournament again. We feel like we are in a regional where we can definitely make it to the Final Four in New Orleans, and we are ready to get this run started.

In our first game, we will play the 15th-seed Navy in Queens, NY. Two of my teammates, Jennifer O’Neill and Jelleah Sidney, are from New York and they are especially excited to go home and play in front of their families and friends. We were watching the selection show as a team at Coach Mitchell’s house and Jennifer was so ecstatic that she jumped up and stopped filling out her bracket because she was so pumped to go back home.

It’s hard to believe but this will be my last NCAA Tournament and my last games in a Wildcats uniform. With that being said, I plan on playing as aggressive as I can because everyone tells me when I’m playing that way and the team runs through me the offense flows better, and I’m going to do whatever I can to help the team.

Last season, we lost to UConn in the Elite 8, and with them being the No. 1 seed in our region, we have the opportunity to have a rematch with them if we are both fortunate enough to make it that far but of course we have to focus on Navy first and foremost. I think this team is poised to make a run because of our talent level compared to last season. We have added DeNesha Stallworth to give us a greater post presence that we didn’t really have last season and everybody is buying into their role and doing the right things so I believe it makes us a more dynamic team.

Thanks for checking in! Hopefully the Wildcats can make a deep run in the postseason and I can keep you guys up to date on UK Hoops.