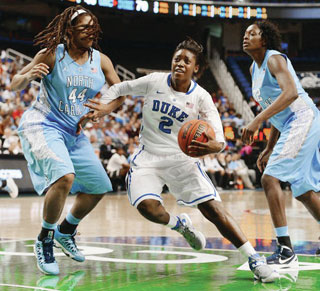 Most freshmen have to carry the team’s bags or hit the free-throw at the end of practice to decide the immediate future: double the running or going home. For Duke point guard Alexis Jones, her freshman season had much more at stake.

When junior All-American PG Chelsea Gray went down with a season-ending knee injury on February 17 against Wake Forest, Jones was catapulted onto the national stage and asked to lead a deep Duke squad ranked fifth in the country into the ACC and NCAA tournaments.

Gray was the team’s pulse, and most thought Duke’s chances were over. Yet when her moment came, Jones knew she didn’t have to get ready—she had always told herself to stay ready.

“After Chelsea went down, I realized that I had to become a vocal leader for the team,” said Jones, who averaged 7.6 points and 3.1 assists before Gray went down. “I had to just come in and try to take over and do what she did to help us win the last stretch of games.”

Jones began to play with the poise of an upperclassman against three nationally ranked opponents in the last four games of conference play. She scored 15 points and dished out 9 assists to beat No. 8 Maryland 75-59 (February 24) on the road, and put up 22 points in a 65-58 win against No. 15 North Carolina (March 3). Duke also defeated No. 19 Florida State 61-50 (February 23).

Jones continued to thrive in the ACC Tournament, averaging 17.6 points and 6 assists per game to win the title and MVP award, scoring a career-high 24 points to go along with 8 rebounds and 4 steals in the 92-73 championship win against UNC. The Blue Devils finished conference play with a 17-1 record.

It all seemed to happen so quickly, despite the fact that running the point in such an unexpected situation can be challenging, as on the court patience as well as vocal leadership off of it takes time to develop, like knowing when to reset a play or when to isolate a struggling teammate.

Despite a devastating end to her season, Gray remained a mentor on the sideline to the younger teammate who took her place, trying to instill in her a pass-first mindset.

“If I had a wide open shot, Chelsea would be like, ‘No, run this play, you’ll get an open look next time,’” Jones recalled. “She’s like another assistant coach guiding us out there.”

In turn Gray respected how quickly Jones picked things up.

“She’s done an excellent job, especially being a first-year player playing on a big stage,” Gray said. “She got everyone involved and did what a point guard does.

“It definitely takes time to become more vocal. It took me a while so I understand that. She’s just getting into her flow, but she’s becoming more comfortable with what the team needs out of her now.”

Duke head coach Joanne P. McCallie was impressed at Jones’ receptiveness and willingness to become an extension of her voice on the floor.

“I think Alexis has been extraordinary in her ability to be a great listener. She’s had a lot of people talking to her. All of our staff coaching her, as well as Chelsea, and with great poise she listens, so I’m not surprised with what great poise she plays.

“I know she’s young and hasn’t quite gotten that respect yet, but she will be one of the best guards in the country as a sophomore.”

The No. 2-seed Blue Devils (33-3) defeated Hampton, Oklahoma State and Nebraska before falling 87-76 to Notre Dame in the Elite Eight.

“We had a special team this year because of their toughness to handle the adversity we faced,” McCallie said. “There’s a lot of left over motivation that we’ll carry over to next year, falling short like we did in the last game, and not finishing our work, what we set out to do.”

Duke looks forward to the 1-2 punch of Gray and Jones feeding off of each other on the perimeter next season. With Jones’ newfound confidence and exposure to tournament play and a healthy Gray come November, the two look to bring Duke even further into the postseason like the great guard duo who came before them, Alana Beard and Lindsey Harding, did.

“Their ability to run the floor and create in transition is a tremendous complement to each other. [Chelsea and Alexis] both have their own set of eyes, their own unique skill sets,” McCallie said. “To be able to have them in transition whether on defense or offense, commanding the floor together, will be something special to watch.

“To me, that’s looking like one of the best backcourts in the country.” 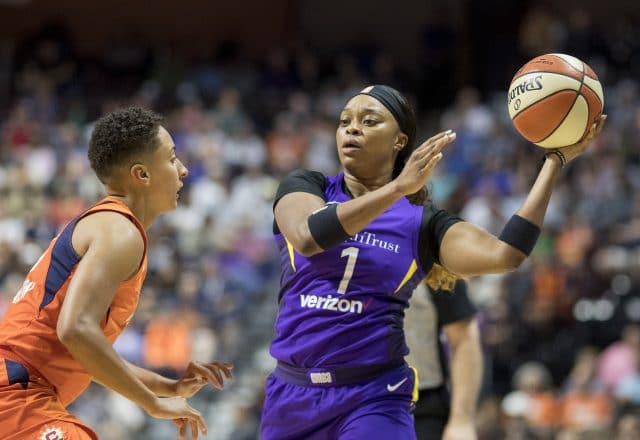