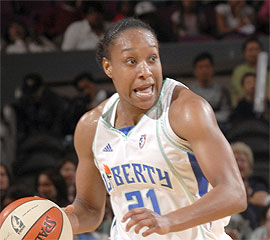 “A statement win,” was the headline used in the New York Post to describe the 83-82 victory the Liberty pulled off against Phoenix on Sunday. The very statement that should have been saved to describe last nights win against Indiana. It’s proven that there are doubters. The word on the street was that New York, coming off of several poor seasons in a row, had only won against struggling teams. Well, at least until they ran up through Phoenix. The first team to put any challenge before them and they answered. Not only did they answer back but a few future stars managed to emerge. Rookie sensations Jessica Davenport and Tiffany Jackson combined for 22 points and 13 rebounds as well as Loree Moore finishing up with 22 points, nine rebounds and dished out three dimes. Phoenix simply could not handle the Liberty.

Don’t get me wrong, the Mercury are good. But they are not the Indiana Fever. Phoenix is a guard-oriented team and although Poindexter, Taurasi, and Taylor can light you up they don’t have an inside presence, a banger so to speak. The Fever is loaded and strong in every position. The clip is full. Tully Bevilaqua, Anna DeForge, Tamika Catchings, Tamika Whitmore, and Tammy Sutton-Brown are hard to deal with in 40 minutes of play.

Both teams struggled with their shooting early in the game. New York was 3-for-9 and Indiana was 6-for-16 in the first quarter. The Fever also struggled with turnovers finishing the first half with eleven, seventeen overall.

Tamika Catchings had a monster game as always. Her line at the end of the game is usually filled up with points, rebounds, assists, blocks, steals, etc,etc….. Last evening was no different she had 21 points, 4 rebounds, 9 assists, 3 steals, and 1 block. Damn, Meek! This is my candidate for MVP. The rest of the team struggled from the door. They simply got out played in every position. Well, except for you know who?

Tamika Whitmore, a former Liberty player had a hard time finding the hole but managed to grab eight rebounds. She went 0-for-4 in the first half.

As for the Liberty, they had five people in double figures. Loree Moore, Ashley Battle, and Catherine Kraayeveld each scored 15 points to lead the Liberty to a 5-0 start of the season. They shot a season-high 61% from the floor, while Indiana shot 42%.

“In the second half we got some easy steals and some easy transition buckets unlike the first half,” Moore [pictured] said. “We are at our best when we run. It gets our confidence up and opens up the inside so we can get lay ups like Jessica had. I think our defense contributed to that but we can’t take these wins too far we do have to get ready for Detroit on Friday.”

The Liberty did almost run Indiana out the gym but an early third quarter run closed the gap to 55-53. The lapse in the third was cause for concern from Coach Pat Coyle who called a timeout to discuss the lack of defense. “We gotta do a better job at keeping the ball in front of us. We need to get some stops!,” she yelled as the team looked on. New York did respond with a 18-6 fourth quarter run and never looked back.

“This was a great test for us, we both came in undefeated,” said Catchings afterwards. “We weren’t focused and now we have a tape that shows our weaknesses. This is something we can build off of. We do meet up three more times this season.”

After my long playing career, tonight was my first night as a media person, a spectator and a fan to the sport that I have a love affair with. It felt good to talk to the players, get the scoop, and reconnect with my roots. Nice. Very Nice…I will be back again soon…