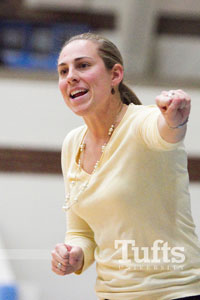 It was 1995. Before people knew that Storrs was the name of a village in northeast Connecticut. Before the Huskies hated the Tennessee orange like Los Angeles hates the Celtic green. Before women’s basketball began to spread into national sports consciousness. That year, a National Championship was at stake for Geno Auriemma’s UConn squad led by Rebecca Lobo.

When sophomore Carla Berube put in two free throws to secure the 70-64 victory against the Lady Vols for the program’s first-ever title and perfect 35-0 record, UConn sparked a meteoric rise in the sport for the next decade.

Little did Auriemma know that Berube would compile her 200th win as the head coach of Division III Tufts this past January in fewer games than it took him.

With her 11th season at the helm of Tufts behind her, Berube has come full circle. While UConn just won their eighth National Championship, she was named an NCAA Division III Regional Coach of the Year after guiding the Jumbos to their best season yet with a 25-3 record and a trip to the Sweet 16 for the second consecutive year. Berube, who holds a career record of 212-75 at Tufts, paces the Division III sidelines with a Division I mindset, getting the best of both worlds.

“I didn’t think I’d become a coach. Not at all,” laughed Berube, who scored 1,381 points in her collegiate career to lead UConn to a 132-8 record. “I was pretty shy and reserved growing up and in college.”

After graduation she played two seasons in the American Basketball League (ABL) for the New England Blizzard. After the league folded shortly thereafter as the WNBA was created, Berube moved to Southern California to volunteer coaching at Cal Poly San Luis Obispo.

“I was missing basketball, and I fell in love with coaching. I decided to hopefully make it my living,” she said.

Berube then served as an assistant coach for Providence College for two years before accepting the job at Tufts in 2002.

With more young women playing ball than ever before, it’s becoming more difficult to simply “walk on” to a Division III team. Division III coaches also recruit throughout the summer at AAU tournaments and camps just like their Division I and II counterparts.

“It’s unbelievable. I was shocked how competitive [Division III] is, just the commitment from the student-athletes,” Berube said. “Coming from only a Division I world, I just had no idea.

“It’s unreal coming from a time when I was one of the only girls playing in the town league I grew up in.”

Though Berube has turned Tufts, a member of the competitive New England Small College Athletic Conference (NESCAC), into a national force, the non-binding nature of Division III athletics poses difficulties.

“It’s hard to find the student-athlete that’s really bright, and can afford a college like Tufts without athletic scholarship money,” she said. “It’s difficult because we can’t do anything outside of the basketball season with our players to really help grow their games.”

Still, there’s something uniquely pure about Division III sports. There’s no jumbotron displaying advertisements and no threat of players leaving early for the pros. Gyms have a homely feel where an entire student body can fill just two sides of bleachers. And most of all, the archaic concept of the “student-athlete” is not lost.

“We’ve had to travel for NCAA games the last two years and we’re like, ‘Oh my goodness, we’re going to miss some class,’ which is so different than Division I where you’re missing days and days of class and trying to make up exams constantly,” Berube said.

“[Our players’] focus is their academic coursework, but it doesn’t sacrifice their commitment to the game and to our program. They’ve got their hands in a lot of different aspects of college life and they’re very balanced young women.”

Berube has used her own experiences at the Division I level to create a big-time feel in a small school environment.

“A lot of my philosophies come from my time at UConn,” she said. “At Tufts we are a defense-first team like UConn is. At the end of the year, we were ranked number one in opponents points per game, holding them to around 42 or 43 a game.”

Auriemma credits her current success as a coach to her quiet confidence as a player.

“She was a great listener and she took everything in,” Auriemma said. “She wasn’t one of those people that was talking when you weren’t finished talking. I’m sure when she talks to her players she has imparted on them the skill of listening.

“She doesn’t like to make a lot of waves or impose on anyone, [and] she is someone who I am incredibly proud of.”

Though Division III basketball is not as fast and the players on average are shorter, there’s something universal about the experience of playing college basketball that Berube wants her players to have.

“A lot of the things that I remember about my experience at UConn don’t have to do with the big-time stage,” she said. “It was the friendships, the tough 6 a.m. practices, the bus trips—memories that you can have at any level. I really want my players to have those experiences and leave Tufts feeling like, ‘Wow, that was an amazing ride,’ in the same way I felt when I left UConn.”

Almost two weeks ago Berube went to New Orleans to watch her alma mater celebrate their one shining moment, while Auriemma has kept close tabs on her winning season as well.

“I’m just amazed at the success she has had an how quickly she has become successful,” Auriemma said. “I’m convinced she could be a great coach at any level—Division I, II and III.”

Yet Berube is quick to downplay her 200th win this year against Middlebury.

“I think if you’re at a place long enough, it comes,” she said. “I was really looking at that game and thinking, ‘We’ve got to win the game.’ It’s nice for the players of the past, seeing that they’ve been part of this milestone.

“I think I’m going to be here for a long time, and I hope more of those milestones come.”