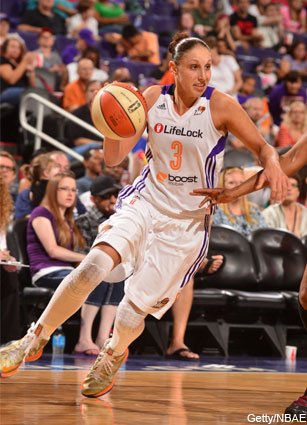 It was a routine trip down the floor. Diana Taurasi dribbled the ball in transition, alternating between her right and left hand. The Mercury were well on their way to blowing out the Shock earlier this month, but Taurasi didn’t slow it up to reset the offense.

With a hesitation move, she slid past her defender for the easy left-handed layup. Already backpedaling the other way for defense, Taurasi didn’t see that she became the fastest WNBA player to amass 6,000 points, reaching the feat in 25 games fewer than it took the previous record-holder, Lauren Jackson.

“I was in the moment,” Taurasi says. “I really didn’t know.”

Late that night, long after talking to media on what it all meant, she finally had a moment to herself. A moment of acute awareness: She had just played her 291st career WNBA game. She had spent over 9,000 minutes in the WNBA accomplishing the mark. And now she found herself in her 10th year in the league.

A decade. Of course, she knew that already. Her body always finds a way to remind her during back-to-back road trips. Yet the word began to take on new significance.

She started to get ready for bed. But she didn’t play back the record-setting layup in her head, or snippets from any other part of her life that got her there: three consecutive National Championships at UConn, two rings with the Mercury, and three Olympic Gold medals. She didn’t bask in her glory because that night was like any other night for Taurasi.

“I go to sleep every night thinking I’m not good enough,” Taurasi says. “That makes me go to the gym early. It keeps me there late. I have this fear of not being good enough, and that let’s me know I’m going to be ready by the time I step on the court.”

Fear isn’t a word we’re used to associating with Taurasi: The one with the bulletproof confidence, the loudest trash talker on any court she steps foot on. But fear doesn’t mean the same thing to Taurasi that it means to us.

It isn’t rooted in insecurity—far from it. She knows she’s one of the best to shoot a basketball; she expects herself to make every shot she takes. Instead, the fear is her fuel, her competitive edge.

She needs it. Because when she’s putting up an extra hundred shots, she’s thinking about facing herself when she goes to sleep at night. She won’t tolerate waking up and not living up to the player she believed herself to be the night before. She won’t accept not measuring up to the standard she created for herself as a kid.

This fear tells her that she’ll never be “good enough” because she can always do better.

That’s why at 31 years old, she’s having one of her best seasons yet. And in a league focusing all of its attention on the young, those that will elevate the game to new heights in the future, namely the “3 to See” in Brittney Griner, Elena Delle Donne, Skylar Diggins—Taurasi is proving that she’s still in her prime and dominant as ever.

Coming off of a hip flexor injury that limited her to just eight games last season, she’s come back with a vengeance, currently ranking second in the WNBA in scoring with 21.4 points per game. Ten times this season, she’s scored 26 points or more.

Though she receives less credit for other aspects of her game, she’s also averaging a career-high 6 assists a night, ranking second in the WNBA. That’s up from her average of 3.6 in 2011 (her last full season). She had double-digit assists three times: 10 vs Tulsa (August 20) and New York (July 2) and 11 vs Indiana (August 14). She’s also grabbing 4 rebounds per game.

Most impressive is that she’s hardly coming out of the game, averaging 32.1 minutes, just one down from her rookie year in 2004, when she played 33.2 minutes. Classic Taurasi is current Taurasi—she’s still got it.

“Diana’s way harder on the people around her than she is on herself,” Auriemma says. “She knows she plays at a high level. She’s hard on others because she wants them to play at the same level she plays at. That’s what makes her such a great leader. She demands a lot of her teammates, and if you don’t live up to her expectations she lets you know about it.

Chicago Sky forward Swin Cash was a junior when Taurasi showed up in Connecticut gunning for a starting spot as a freshman.

“Here she was, a hot head from California coming into pre-season practice,” Cash recalls. “We were playing one-on-one. I was going off, she was going off. It was going back and forth, and we really got into it.

“But then after we stopped, we had our first real talk together and I realized, Man, I would go to war with Dee. Yes, she is really competitive with her own game and works extremely hard at it, but she’s one heck of a teammate. She pushes people. She’s the greatest competitor I’ve ever played with or against.”

The Mercury had high expectations coming into this season when they landed the No. 1 overall pick in Griner, but didn’t expect a knee injury to keep her out for most of July. Phoenix is now 14-13, third in the West and pushing toward a playoff berth.

As Taurasi looks ahead into the immediate future, she tries not to look too far back.

“It’s really cool to have longevity in my career, to still be here,” Taurasi says. “But I have a lot of basketball left in me. Right now I just want to work as hard as I can.”

Whether or not she does win another championship come October or ends up reaching 10,000 career points at some point down the line, she’ll still go to sleep wanting more.