Diana Taurasi has become the greatest player in WNBA history. 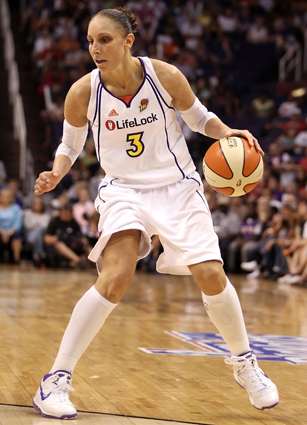 Phoenix Mercury guard Diana Taurasi hits a step-back jumper. It yields just her sixth and seventh points of this game, but  in the big picture, the 4,000 and 4,001st of her career. With that basket, Taurasi became the fastest player in WNBA history to 4,000 points, and she’s not even aware of it. Not surprising, though—she didn’t know she was the fastest player to 3,000 points. Or that she was the only WNBA player to score 800 points or more in a single season (which she has done twice). Or that she has more 30-point games than any other player in league history.

She doesn’t keep track of those accolades because they mean nothing to her. Not now, not ever. Tonight, the Mercury’s lead against the Atlanta Dream is dissipating. Nothing else matters more to Diana Taurasi than this exact moment. Holding on to this game is, literally, the only thing on her mind.

“Ehh,” says Taurasi as she shrugs off the attention she receives for passing the 4,000-point milestone after the 100-82 Mercury victory. “I’m not really one for individual records.”

“The only thing I’m guilty of is taking too many jump shots.” —Diana Taurasi, 2011

If scoring is a crime, they need to take the ball away from Diana Taurasi, lock her out of the gym and throw away the key. Actually, that might be a bad analogy to use since that was the reality for Taurasi this past winter.

Playing overseas in Turkey during the WNBA offseason, a lab there falsely accused her (and multiple other athletes) of taking a banned substance. Maintaining her innocence from the start, Taurasi, cast as a villain and cheater by many, was eventually exonerated and found free of any wrongdoing.

The ironic and oddly funny part of the allegations is that anyone who has seen the 28-year-old play over the last decade knows she doesn’t need external help to make her better; her ravenous desire to win and unparalleled work ethic take care of that.

Now heading into her eighth season in the WNBA, Taurasi is more motivated and driven to win than ever. That may sound bizarre considering she has already captured three consecutive national championships in college (Connecticut, 2002-04), two WNBA Championships (’07, ’09), two Olympic Gold medals (’04, ’08) and a WNBA MVP Award (’09).

It’s true, though. The controversy—if you can call it that—in Turkey provided Taurasi with a renewed appreciation for the game itself and increased incentive to prove those who vilified her wrong. All of this has to be a terrifying reality for the rest of the WNBA.

There is an age-old adage that says everything in life has a silver lining. Taurasi has adopted this mentality of late. Having basketball temporarily taken away from her, even if it was through no fault of her own, was obviously an excruciatingly difficult situation to deal with. But on the silver lining side, it allowed her to return home to the United States for some long overdue rest. (Prior to 2011, Taurasi hadn’t had a multiple-week break from professional basketball since her rookie season in ’04.)

Few people realize the majority of WNBA players hop on a plane within hours of their summer season ending to play overseas where, for seven months, they often endure grueling two-a-day practices. Taurasi not only plays internationally, she’s earned championships and fame there tantamount to her success on the WNBA side of the pond. Despite her record-shattering game that’s helping change women’s basketball, Taurasi—again, ever humble—defers credit to those who’ve come before her.

“It’s kind of a revolution right now,” says the unstoppable 6-0 wing. “A lot of the great basketball pioneers have left the league in great shape and you try to continue that, not only here in America, but overseas as well.”

At just 15 years old, to accurately define what it means to be a “legend” in the WNBA can be challenging. Because of time and talent, there are only a handful of women’s basketball players who can legitimately be in that discussion. Forget legend, though. Diana Taurasi’s the female G.O.A.T.

Being the G.O.A.T. not only connotes accomplishing things we’ve never seen another female do on the basketball court, it also means elevating the game to an entirely new level, consistently setting the bar higher for future generations of players. From the time she first set foot on the hardwood, this is precisely what Taurasi has done. Her passion and intensity for the game, if not her style of play itself, is something women’s basketball has never seen.

“To this point, I don’t believe there’s anyone that has done what she’s done,” Taurasi’s college and Team USA coach, Geno Auriemma, said after she was named WNBA MVP in 2009. “When she’s finished, she’ll have every record that exists in women’s basketball; scoring, shooting, assists, rebounding, whatever. Is it possible that another young lady will come around in the future and have a shot at breaking those records? Sure. But I haven’t seen that person yet.”

The way Taurasi and the NBA’s greats approach the game is nearly indistinguishable. They have a compulsory need to get better and an insatiable thirst for winning. Their infectious hunger for the game raises the level of play of everyone on the floor. Contentment doesn’t exist. For Taurasi (along with Michael Jordan, Kobe Bryant and the like), the basketball court has been and continues to be, their Fortress of Solitude.

When off-court incidents have given players of this caliber every reason to slow down or become complacent, each has utilized them as motivation to become a better player. It’s this mindset that has become mandatory for Taurasi—something she physically and mentally needs in order to sustain the level of success she’s attained.

Even the Black Mamba himself recognizes her game.

“She is a Mamba,” says Bryant, as he prepares for his latest run at another NBA title. “The white one.” 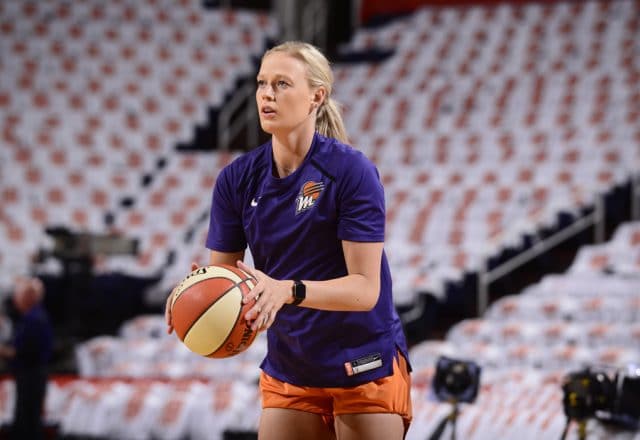