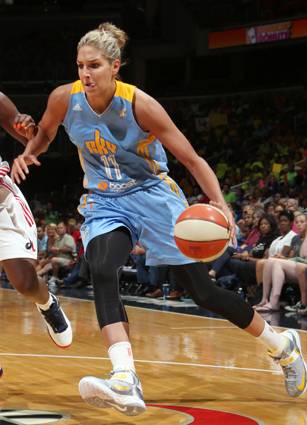 As an elementary schooler, Elena Delle Donne nearly chopped her right thumb off with a power saw.

“I don’t know why they have third-graders in shop class,” she wonders while sitting down after a recent shootaround at the Verizon Center in Washington, DC. “I was a daredevil and wanted to make the coolest thing out of wood. Luckily, I pulled back fast enough that it didn’t get the tip off.”

With a faint scar the only lasting damage of her overzealous childhood handiwork, these days Delle Donne has no problem carving up competition on the hardwood in every WNBA city on the map.

That includes the nation’s capital, where she returns unexpectedly from a left foot injury to lead the Chicago Sky to a 79-73 victory over the Washington Mystics in late August. If the foot, laced in the LeBron Soldier VI, is bothering her, she doesn’t show it—the nearly 24-year-old pours in a game-high 24 points and registers a ridiculous +20 plus/minus in her 32 minutes of action.

It’s the kind of night that’s become routine for Delle Donne, who is in large part responsible for the Sky sitting atop the Eastern Conference standings heading into the 2013 WNBA Playoffs—the first-ever Playoff appearance in the franchise’s eight-year history. (Chicago opens up its first-round series tonight against Indiana.) In her rookie season, she led the WNBA in free-throw percentage, finished second only to Maya Moore in three-point shooting percentage, and ranked fourth in the league in scoring at 18.1 points per game. Barring a glitch in the voter database, Delle Donne will be hoisting the Rookie of the Year trophy as soon as today, if not a title, too.

She’s long, she’s a dead-eye shooter and she can handle the rock. Lose her in transition and she’s spotting up to rain a three. Chase her over the top of a high screen and she’s at the rim finishing. She’s 6-5 with guard skills. She does things like this:

Quite simply, the WNBA has never seen a player like Elena Delle Donne.

“People are still trying to find comparisons for her in the women’s game,” says Sky head coach Pokey Chatman. “I don’t think there is one yet.”

So far, the best comps come from the men’s game. Players like Dirk Nowitzki and Kevin Durant seem like logical parallels for Delle Donne, given her versatility, her size and her outside shooting. Basically, as veteran teammate Swin Cash puts it, “Her skill set is sick in her size body.”

That a player with Delle Donne’s abilities is finding success at the WNBA level so quickly isn’t necessarily surprising. She’s got the goods, period. But reaching the pros wasn’t easy. Or at least, things didn’t go exactly to plan. Exactly how they were “supposed” to.

Delle Donne first played organized ball at age 4, on an all-boys YMCA team. She would routinely play with her older brother, Gene (a future DI college football player), and his friends. And she more than held her own. “It was fun, beating up on boys and them getting so angry,” she laughs.

By the time she was 12, Delle Donne had earned national attention. Chatman, then the head coach at LSU, remembers often making a point to catch Elena’s AAU games on East Coast recruiting trips “just as a treat.” Delle Donne’s first scholarship offer, from North Carolina, came the summer after she finished the seventh grade.

And, when the name Elena Delle Donne first graced the pages of SLAM, she was a 16-year-old high school prodigy, with every Player of the Year award ever created under her belt and invitations from every top college program in the country. She had just dropped 50 points in a Delaware state title game win—her Ursuline Academy team’s third straight—as a sophomore.

After a long courtship, Delle Donne committed to UConn and head coach Geno Auriemma but unexpectedly bolted for home in the middle of the night just two days into her stay in Storrs. She missed her family, including her older sister Lizzie, who was born blind, deaf and has cerebral palsy and autism. Fed up with the hype machine, Delle Donne enrolled at the University of Delaware and took a year off from basketball entirely, enduring plenty of criticism along the way.

The nation’s top recruit in the Class of ’08—the girl some said had a shot to be the best to ever do it—abruptly gave up her hoop dreams, deciding to play volleyball as a walk-on instead. To outsiders, it didn’t compute. Critics called her weak, said she lacked the mental toughness to be a competitor at the highest levels of her sport. And she heard all the noise. But Delle Donne’s desire to stay connected to her family superseded her drive to play the game.

“I didn’t think I would ever play again,” she says. “I didn’t even see college.”

Not until the following season, with her family’s blessing, did Delle Donne return to the court, this time at home as a Blue Hen. “Once I finished up with volleyball and was able to take a seat and see college basketball in action, that’s when I missed it. I was like, Hey, I’m just gonna try it out and have fun with it. I didn’t know if I was going to play in the [WNBA] at that point. I just wanted to have fun while I was playing and see where it took me.”

She promptly made Delaware not only a must-watch team (at one point during her redshirt freshman season, she hung 54 on James Madison) but also into a Top-25 squad from the tiny Colonial Athletic Association. She led the nation in scoring her junior season with 28.1 ppg and followed up with 26 ppg as a senior. Pretty damn fun.

The Sky made Delle Donne the No. 2 overall selection in this past April’s WNBA Draft. Re-directing from UConn didn’t stop Elena one bit on her journey to the pros, after all. Sure, she may have missed out on a couple National Championships. But blazing her own trail worked out just fine—ironic, since as a prep star she scoffed openly at the thought of staying home for college at Delaware.

So, what would a seasoned Elena tell a younger version of herself now of her college choice?

“Stop being so stupid.”

“I just thought I had to do what everyone else had done before me,” Delle Donne admits. “Usually the top recruits go to the top schools. I didn’t know at that time that I could pave my own path and have it be just as great of an experience. You’re young, you don’t know what you want, you usually follow the people ahead of you and whatever everyone thinks you should do.”

As for the coach whose team made Delle Donne a top pick at the pro level, Chatman never flinched at Delle Donne’s past. “What I’ve learned about Elena is she’s really strong in her convictions,” explains Chatman. “Like, everyone else took the leaving Connecticut as a sign of weakness. I took it as a sign of strength. I don’t know many people that could have walked away from that, even if they wanted to, knowing you’re going to be scrutinized for the rest of your life.”

Delle Donne hopes now that she’s becoming a star in the pros, she’ll be able to put the tumultuous start to her college career behind her. “College helped me grow up a lot,” she says, sounding like a typical recent grad. “Now I’m able to spread my wings.”

It’s an apt choice of words for a player who grew up obsessing over Michael Jordan and now plays in the city where his name defines the sport.

As a rookie, Delle Donne is still navigating the rigors of the WNBA, learning to deal with living in a new city (she proudly threw out the first pitch at a Cubs game this summer), surviving the constant schedule of flights and hotels, and still finding time to watch her favorite cartoons shows (Hey Arnold! and Arthur are among her favorites).

And her game still has its warts. Delle Donne’s defense, while improved—her 1.8 blocks per game were good for fifth in the league in ’13—still has a long ways to go, something Chatman reminds her of constantly (“EDD: efficient, dynamic and defense,” the coach repeats over and over).

But even as she’s focused on the finer points of her game and her day-to-day life in the pros, Delle Donne is keenly aware of the bigger picture. She’s part of a draft class, along with fellow top picks Brittney Griner and Skylar Diggins—dubbed the “3 To See”—that’s been tasked with growing the game.

With the addition of that trio, there’s undoubtedly more attention on the women’s game this season. The dunking, shot-blocking Griner may have come in with more of the hype, but it’s Delle Donne who’s quickly emerging as the face of the WNBA. Which is why rather than head overseas to chase a check during the offseason, as most players do, Elena plans instead to stay home, rest up, run camps, shake hands and kiss babies on behalf of the sport.

“Sometimes I sit back and think about where the league is at and where I want it to go, but the best way to do that is to put a good product out on the court. So you’ve just got to go about your business day to day and put out a good product. Then people will start to follow,” says Delle Donne, who refuses to set goals in terms of hardware or statistics, but when pressed, acknowledges she does want to leave a lasting impact on women’s hoops. “Hopefully, one day we’ll be able to look back and see that I was a unique player that changed the way that people looked at the game.”

Elevating the game takes a special player. So just how good can she be?

“I don’t want to say the ‘Sky is the limit,’ it sounds corny,” Chatman says. “But it—I stutter thinking about it, because I’m excited.”

Chicago assistant coach Tree Rollins, who played 18 seasons in the NBA, thinks she can be “one of the top-five players to ever play.”

Delle Donne meets the high praise by crediting her teammates, like Cash and fellow All-Stars Sylvia Fowles and Epiphanny Prince, all of whom know that EDD is the straw that stirs the drink. “She wants to be the best,” says Cash. “She works like she’s going to be the best. Only time will tell.”