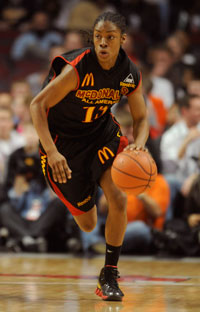 The best post player in the Class of 2011 is Elizabeth Williams, bound for Duke. She’s known for her strength, her great footwork, her ability to finish with both hands and her toughness in the paint.

So what’s the first thing she does in the McDonald’s All-American Game, on the East’s first possession, no less? That’s right, she knocks down a three.

“No one had picked me up, and after seeing me shoot threes in practice yesterday, my coach told me that if no one was guarding me, I should shoot it.” Williams said.

Williams’ long-range shot made it 3-2 and the East never trailed again.

And speaking of coaching, it’s usually not an issue in these kinds of games, given the limited practice time, but Mary Coyle Klinger, the East coach, deserves some credit. Though the rosters were balanced, her team was more cohesive, more organized and dominated the game much more than the 78-66 final score indicates.

Of course, it’s in the blood. Coyle’s sister Patty coached the New York Liberty up until the 2009 season.

Though the crowd was the best ever for the game (20,019, standing room only), the start of the girls’ game was played in an oddly silent arena. The thrum of conversation not related to the game was louder than what was happening on the court — which was partially explained by the fact that the East was up by as much as 22 in the first 20 minutes.

Perhaps the most interesting back story on the girls’ side belongs to 6-4 Temi Fagbenle, who had her choice of three national teams. Her parents are Nigerian, but she was born in the United States and also claims English citizenship. Even though she went to high school in the US and will play for Harvard, she’s decided to represent England, and will undoubtedly be on the British Olympic team in 2012.

First, though, she’s going to change things in the Ivy League. She may not have scored Wednesday, but she blocked 2 shots in less than a minute and showed speed and coordination running the long floor at the United Center.

The two teams scrimmaged Tuesday afternoon, leading to a bit of woofing at the hotel Tuesday night. According to East players, the biggest talker was Kaleena Mosqueda-Lewis, the great shooter who will go to UConn.

After the game, Mosqueda-Lewis was in no mood to acknowledge that she may have fired up the East — she wanted to win, just like all the girls.

rebounding. “We wanted to lock them down,” said East point guard Ariel Massengale (Tennessee), and that’s exactly what happened. The West hit two of its 14 shots and at one point was five for 29.

“We took too many outside shots,” said Brianna Banks, the West’s leading scorer, who will also go to Connecticut.

Kiah Stokes only had 1 point, and her team lost, but it was still a day to celebrate. It was her 18th birthday — and she had just spent a week at the McDonald’s All-American Game, which remains the gold standard for post-season high school all-star games.

“It was so much fun,” said Banks about the week, which started with a visit to the Ronald McDonald House, which gives parents of seriously ill children a place to stay while their child is getting medical treatment, and included four days of activities and events. And then, the second half, at least, was played before a large crowd the girls, in a glamorous arena, so in the end, it wasn’t as much about who won as it was about just enjoying the experience.

Which is as it should be. 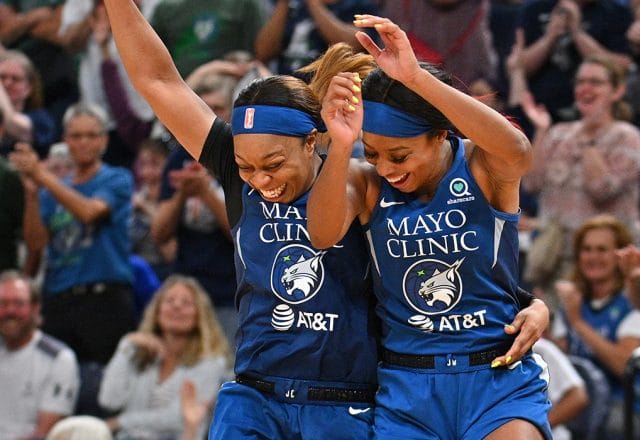