Flight of the Monarchs 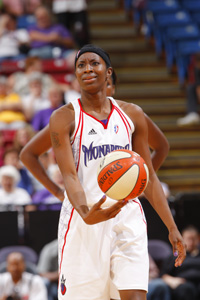 • The Maloof family, which owns the Sacramento Kings and Monarchs, has rightfully claimed that it cannot compete in the 21st century NBA without a new arena.

• Even if they wanted to, the Maloofs do not have enough money on their own to build the kind of arena they need – which means that they must get some kind of financial help from the City of Sacramento.

• Though the politicians have been willing to come up with some money, the voters have not, so for the Maloofs to merely survive, much less thrive, in one of the smallest NBA markets, they must develop enough community support to pass some kind of ballot measure authorizing funds for a new arena.

• The Monarchs won the WNBA championship in 2005, and have a small but passionate group of fans who could be counted on to support the Maloofs’ drive to keep the Kings and Monarchs in Sacramento.

• The Monarchs were a solid franchise, and most likely turned a small profit when the team was good and 6,000 or more fans regularly came to ARCO Arena on summer nights. The team, though, was just 12-22 this past season, and crowds had thinned into the 4,500 range.

• The Kings were a solid franchise, and most likely turned a significant profit when the team was good and a ticket to sold-out ARCO was a precious commodity. But the Kings are now terrible, and since the announced crowds have dwindled into the 11,000 range, the actual number of fans in the seats is most likely around 7,500.

• A struggling NBA team can lose $30 million a year.

• The Maloofs’ primary businesses are located in Las Vegas, which is in many ways ground zero for the nation’s economic collapse. Not only has the Strip suffered, housing prices in the area have plummeted by 33 percent, the worst in the nation.

• There are persistent rumors that the Maloofs had money invested with Bernie Madoff, and we can all guess how that turned out.

• The only hope for the Maloofs and the Kings is to get the voters to support a new arena, but they cannot afford to alienate any possible interest group that might help them, especially female voters and Monarchs’ fans.

• The Maloofs just shut down the Monarchs.

If you carefully connect all those dots, the picture that emerges is a canary in a gold mine, struggling to breathe. And no, the gold mine is not the WNBA, which is hardly that, and not even the NBA, but rather the whole idea that owning sports franchises was a relatively easy way to get rich while having a good time. The trick wasn’t necessarily to make money every year, though that would be nice, but instead to sit back and watch the value of the team grow, so when it came time to sell, tens of millions of dollars would magically come rolling in from the next round of investors in the athletic Ponzi scheme.

But the disappearance of the Monarchs, though no more than a blip on the radar to sports fans, could well be the first sign of a serious change in the weather for the guys in the big offices.

What it says about the Maloofs and the Kings is pretty obvious: Sacramento can wave bye-bye to its only major league sports franchise come next summer. Clearly, by folding the

Monarchs, the Maloofs have given up on ever passing a measure in support of a new arena, and without a new arena, even in the best of the times, they simply will not have the resources to make it the NBA. (The fact that the Kings are horrid, and will continue to be horrid for the near future, is another factor, but not nearly as important as the thousands of empty seats 41 times a year.)

In the past, the next step would have been pretty obvious. David Stern and the other owners sift through the list of big-money, big-ego types eager to get some NBA action, squeeze a new arena out of some politicians and developers, and move the Kings somewhere else. But right now, somewhere else looks a lot like nowhere, as there are no obvious candidates, either individual or civic, to take on the moribund franchise.

In short, what we may have is contraction. The Kings’ roster, such as it is, may simply be tossed into a dispersal draft (the WNBA knows just how to handle these, having administered many during its existence), and the ’10-11 NBA may have one fewer team. The NHL has also been talking about contraction, for the same reasons, and there is a certain historical inevitability that the meteoric rise of professional sports in the United States must be followed by some kind of a fall.

As for the Monarchs, the league is hoping to slide them 80 miles to the southwest, into the Bay Area, where another struggling NBA franchise, the Golden State Warriors, may decide to be a little more cooperative about renting out Oracle Arena than in the past. As for the Kings, the canary is singing the fat lady’s song, and Sacramento fans should try to enjoy what they can of this last go-round.

And as for the NBA, it’s time to retrench and rethink. The hard times are real, and probably won’t go away any time soon. There’s still gold in the mine, but it’s going to take more work for owners to turn a profit, and relying on the sale of the franchise to turn red to black at the end of the run is far from a sure thing any more.

Connect the dots – and it’s not a pretty picture.