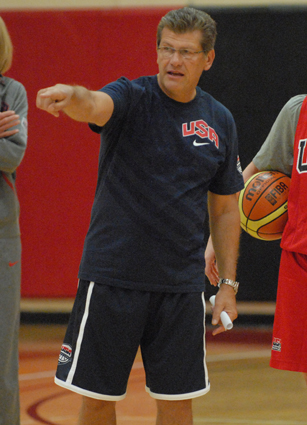 As told to Peter Walsh | @goinginsquad

I am incredibly honored and excited for the opportunity to coach Team USA at this summer’s Olympic Games. Even though the US has won four straight Gold medals at the Games, I haven’t won anything. My coaches and I are preparing as if we’re one of the teams that has a chance to win it all, not as if no one can beat us. This is the biggest task I’ve ever undertaken—I’m representing the United States, not the University of Connecticut, and there’s a big difference.

Despite the United States’ incredible track record, I’ll feel the stress once I get to London. But once the Games begin, I’ll do what I always do at UConn: Trust that the players are prepared and ready to go. I might get a few more chances to win another National Championship, but this may be my only chance to win a Gold medal.

The Selection Committee has done a tremendous job picking this year’s team, and there’s definitely a sense of familiarity considering that I have already coached 10 of the 12 players at some point over the past decade. The familiarity is important because the girls will be immersed in the WNBA season leading up to the Games. The fact that I know all these kids and have been around them and coached most of them makes things easier, but it’s still a difficult situation being that we will have little time to prepare.

But believe me, no one is feeling sorry for us. Teams aren’t going to roll over because on paper we have the best players and are the deepest team. We expect to win, but we know that we have to prepare and play at the highest level to achieve our goal. Every good team has a certain aura around them and walks around with an air of confidence. I want this team to eventually have that same aura. It’s a fine line between confidence and arrogance, and I won’t allow them to carry themselves with a sense of entitlement and believing that every other team is playing for second place. That will never happen as long as I am the coach.

When my former players—especially Sue Bird and Diana Taurasi—are on the floor, it’s like having an extension of myself out there. During their four years under me at UConn, they were part of countless meetings, shootarounds, practices and timeouts, so I trust them implicitly. Having them on the floor is like being the coach at the Pro Bowl and having your quarterback in the huddle. You have a communication level and a comfort that what you say is going to be repeated in the huddle exactly the way you want it to be repeated. There’s not going to be any disconnect there, and that’s huge when you only have a little bit of time to get ready.

There is going to be excellent competition in London this summer, and I know teams like Russia and Australia are expecting to be playing in the Gold medal game. But given the recent history and who we are, anything less than a Gold is going to be very disappointing.