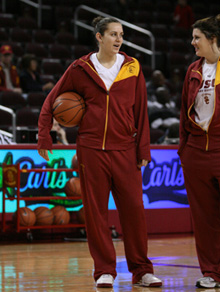 It’s been too long. Way too long.

And sadly, it will never be what it might have been.

Jacki Gemelos, the number one recruit in the country when she graduated from St. Mary’s of Stockton (Calif.) in 2006, will take the court Thursday for USC against the University of California in Berkeley.

Why is this news? Because this will be the first game Gemelos has played since February 23, 2006, when her high school career ended with a torn ACL. At the time, she was averaging 39 points a game, and was simply the most spectacular prep offensive player since Diana Taurasi. Then-USC coach Mark Trakh could look forward to playing a 6-0 guard who could do everything, and do it well. Gemelos could pass as well as shoot, bomb long threes as well as penetrate, and do everything with a flair and passion that marked her as one of those special players who are destined to take a place in the game’s history books.

But Gemelos loved to play, and I remember seeing her at the Portland airport in a wheelchair. Her knee was hurting, she said, but it was nothing really serious. She’d be out for a while, she thought, but there wasn’t any structural damage. I later heard she got off the plane in Atlanta and played five games the next weekend.

The next winter she tore her ACL. She slowly rehabbed at USC – and tore her ACL prior to the start of the ’07-08 season, according to some reports because she loved to play so m

uch she got back on the court too soon. Again, the rehab. Again, the slow climb back. Just before the ’08-09 season began, Gemelos tore another ACL. Then in May 2009, the fourth operation.

And now, on February 4, 2010, Gemelos is finally ready to play her first college game.

Only those who have been through ACL rehab know how painful and difficult it is. And only those who have had operations on their knees can grasp how the pain of the injury and the grueling recovery sap confidence and aggression. But no one can appreciate what Jacki Gemelos has been through – four times she’s gone into surgery, and four times she has come out with the promise that this time it will work, this time she’ll be healed, this time she’ll be good to go, at least after a year of so of time spent with trainers, off the court, patiently working knee against machine, testing the pain threshold that has been tested so many times before.

I would love to believe that we’ll finally see the Jacki Gemelos we saw back in 2006 – but I’ve been around too long. Most young basketball players can bounce back almost completely from an ACL tear, though it sometimes takes 18 months instead of just of a year. A few players have returned from two such injuries – none, however, from three, and I don’t know of anyone who’s even tried to come back after four major surgeries, much less succeeded, and much less looked like anything but a shadow of the player she once was.

No, the victory for Gemelos is merely that she finally gets to play, and will take the court just 90 minutes from her hometown, where fans, teammates and opponents understood how good she was, and how good she could have been.

But even so, the depth of the loss cannot be overestimated. Even if Gemelos had been an ordinary college player, her love for the game is apparent in her willingness to go through so much pain and suffering to get back on the court. For her to lose the chance to play would be tragic enough, but she has also lost the opportunity to live up to her enormous potential. She can never know how good she might have been, never know if she would have been an all-American, a lottery pick in the WNBA draft, an Olympian. It’s all gone, disappeared in the twists of her knee, the tangle of torn ligaments.

Those who saw her were pretty much unanimous: Jacki Gemelos was a superstar in the making, a once-in-a-decade combination of talent and charisma, skill and love for the game. Of course, she would have had a huge impact on USC (I’m betting Trakh is still coaching there if she’s healthy) and the Pac-10. She would have gone a long way towards getting Southern California, the school and the region, excited about women’s basketball. She would have attracted casual fans and TV cameras, she would have been with USA Basketball, she would have been a WNBA lottery choice.

The game needed her, and more like her, because women’s basketball suffers from a lack of offensive superstars, which is just what Gemelos was. The cost to Gemelos, of course, is immeasurable, but the cost to USC, the Pac-10 and an entire sport has been huge as well.

It will be hard to set all the what-might-have-beens aside on Thursday, but it will still be a joyous day for the Gemelos family. There’s a lot of loose talk about long roads to recovery, but what Jacki Gemelos has gone through to play the game she loves puts all the rest in perspective.

And who knows? Maybe this is the first step to a story that will rival that of Kurt Warner’s, and maybe a few years from now, we’ll look back and say “We never thought she had a chance to be what she was – and how wrong we were.” 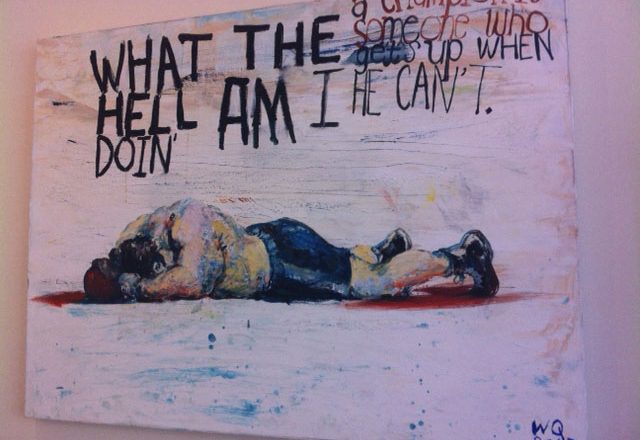