Pedal to the Medal 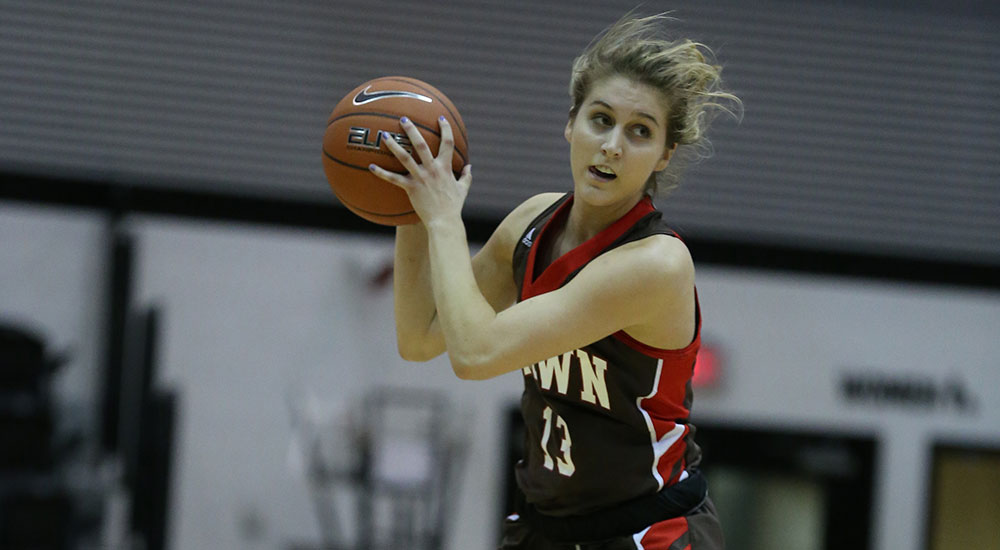 Jordin Alexander has been told that before she’d turned 2 years old, her dad, Douglas, would bring her into the TV room in their home to watch the Indiana Hoosiers play basketball. As she grew up in Fishers, a town some 70 miles north of Bloomington, she noticed that everyone in her family played the sport.

Alexander soon felt that same magnetic pull, and she began pursuing her state’s pastime. Only, as she watched games, she noticed something more. The way a canny cut here, or a tidy bit of footwork there, allowed the best players to thrive. It was Reggie Miller, her favorite Pacer, using his body to exploit every potential increment of space in order to rise up and release that inch-perfect jumper.

“Our body types are similar,” Alexander said over the phone on a Tuesday afternoon, explaining why she picked Miller as her case study for her education in hoops. “We’re not super-strong, so we have to move a lot without the ball. Reggie changed speeds so quickly. He’d sprint from one side to the next, and he always seemed to find a way to get open. I always enjoyed watching that. He had a mid-range game, and he could always hit those threes. I modeled my game on that.”

Enter endless games of one-on-one on the hoop in the family driveway with her two younger sisters. Then, Alexander would head over to the park to play pick-up. She honed her distinct offensive style, a two-pronged ability to either beat you from deep or, should a defender begin cheating, blow past you and utilize a medley of mid- to close-range shots.

Alexander never shirked the cultivation of a skill base. She hoisted all those jumpers, went through the series of dribbling drills, but she notes now that it was by applying these skills to game-type situations—all those runs in the park—that allowed her to try out what she’d worked on and, upon reflection, figure out when and where it worked best.

Despite playing a key role in so much success, and some impressive showings at various summer elite camps, Alexander didn’t get many looks from high-major colleges. This was partly due to the fact that she grew late into her current 5-10 stature. Once she did, schools began swooping in.

But Brown had been there from the beginning, and Alexander liked the perfect marriage it provided of high-competitive basketball and top-quality academics. She visited and fell in love with this school perched upon the top of a hill in Rhode Island’s capital. She committed before her senior year of high school.

“When I visited the campus, I loved the atmosphere,” said Alexander. “And with the open curriculum (a hallmark of Brown’s education for more than four decades), you can create your own degree, and try out different courses. It’s a really good experience. I thought a lot about it, and I just felt comfortable. And the degree is what matters in the end.”

Alexander had lived in the Midwest her entire life, so a culture shock was inevitable upon moving East. But she threw herself into the new. Meeting new people was exhilarating, and in her new teammates she found unconditional support.

Then came the dark. During her first two seasons at Brown, Alexander played in just 25 games. A bout of mononucleosis cut her freshman season short, then severe shin fractures ended her second campaign prematurely.

“Being away from family was hard enough, and then not having basketball, which had been my whole life for so many years, taken away…and the second year sucked,” said Alexander. “I wanted a fresh start, and then ‘that’ hits me.”

Every day, Alexander pushed through the tedium and told herself she would come back stronger for her junior season. “The mental game—that’s the biggest struggle I had,” Alexander said. So, she told herself she was starting over, and the last two years were swept away.

Then, that very spring, Sarah Behn was named Brown’s new head coach. A star at Boston College (she finished with 2,523 points, which still stands as the program record), Behn coached UMass Lowell for three seasons, shepherding them through the transition from Division II to DI ahead of ‘13-14. In their final season in DII, UMass Lowell averaged 82 points per game, playing an entertaining brand of up-tempo basketball. They pressed after made baskets, they searched for good looks on offense—preferably within the first 12 seconds of the shot clock.

When Alexander met with Behn in the spring of last year, Behn told her that she wanted the Bears to equal her previous team’s output. She wanted them to practice an entertaining brand; Behn knew from experience that it would put fans in the seats. Alexander realized this was someone who saw the game the same way. She signed on immediately. “Having Behn come in, her style and everything, it gave me more room to play how I do. It did for everyone, and that played a huge part in how the team performed last season,” Alexander said.

Twenty-nine points in the season opener, and eight games with more than 20 for Alexander before ‘14-15 was through. Her 15.0 points led Brown, and were the fifth-highest tally in the Ivy League. She slid seamlessly between perimeter positions, and used her expert conditioning to great effect. As defenses tired, Alexander’s eyes lit up. She’d drive even more. A fifth of her points last season came from the foul line. “[Coach Behn] really likes fast-pace, and we like to push,” said Alexander. “It was definitely different than my first two years here. She opened it up for us to feel free.”

Brown returns four starters from a team that went 10-18. A strong recruiting class joins that core. Behn is giddy about the prospect of depth. This offseason, she’s tasked Alexander, who was named one of three captains for this season, with becoming even more of a leader—and rediscovering her dead-eye three-point shot. (Alexander attempted just 27 treys last season.)

Music to the ears of a Reggie Miller fan.

“In high school, I used to be more of a three-point shooter, but last year I concentrated on mid-range and taking it to the hoop and finishing,” said Alexander. “But defenses really started to pack it in on me, so I need to be able to pull farther out and hit threes. This summer has been about building confidence. I’m putting up a lot of shots. I’ll be a threat from deep this season.”

Alexander has the possibility of a fifth season of eligibility, a silver lining from those abridged first two years, but the Ivy League strictly adheres to a ruling that does not allow a player to feature more than four seasons for one team in conference. That opens up the possibility of a grad transfer and immediate eligibility for another Division I team in ‘16-17, once Alexander has finished her degree in public health. “I’m considering getting my masters in that field, so I’m looking at schools where I could knock out that program during my fifth year in college,” she said. “I don’t want to be done already. I’ve played this long. I’ll be sad when it ends.”

That’s all in the future. Right now, there’s a reclamation act brewing at Brown. Behn has targeted 15 to 16 wins this season, which would put the Bears on the pedestal of a possible post-season bid. Said Behn, “We’ll keep trying to push the pedal to the medal.”

Alexander’s excellent junior season was two years in the making. It sprang from pain and disappointment, which she transformed into fuel. Now, she has a year of Behn’s new style under her belt, and all the confidence from being named Second Team All-Ivy. Add another healthy summer to the mix, and, well, some might watch a player rocking No. 13 for Brown this season and think of a certain Pacers all-time great.