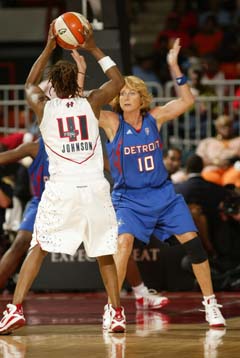 How many times have you played ball against someone faster, more athletic and younger? No matter the game we each possess inside our own minds, there’s always someone who can knock your ego down a peg. That is, unless your name happens to be Kobe Bryant or Lauren Jackson.

Yet, as a part of the publicity surrounding the WNBA brawl earlier in the season, ESPN broadcaster Nancy Lieberman took to the court for a single game for the Detroit Shock. Let’s not forget she is 50 years old and played against players less than half her age.

In a recent conversation with Stephen Litel, Lieberman discusses how this event came to fruition, as well as how she felt comfortable and confident enough to make the attempt.

SLAM: Certainly, it’s something you’ve been asked a lot, but how did everything occur to have you suit up for the Detroit Shock this season?

Nancy Lieberman: Well, we’ve been talking about it for a year with a “wink-wink.” When Bill Laimbeer saw me at the All-Star game last year, I ran through the skills contest and he was impressed that my time was up there with the top two or three players in the competition. He made a kind of off the cuff comment that “Maybe we’ll sign you to a seven day next year” and my retort was, “Well, Bill, you have my number” and we left it at that.

I knew I was going to play in the WNBA this year at some point. I guess I did know when, but I had been talking to Minnesota. Then when Bill called and said he had a window of 10-12 days that he’d have a roster spot and asked if I could do it now. All the ducks lined up correctly because of my relationship with Detroit, having been their coach and GM, the game was on national TV on ESPN and, on the player side of it, I could get my number 10. You know, players are identified by their numbers and it just seemed like it was the right thing to do.

Then, of course, he was trying to get the paperwork done to get the approvals and then they had the brawl. I knew right then and there, in talking to Bill, this was a situation where they had time, they had a roster spot and I was ready to do it.

To be quite honest with you, it’s been one of the most phenomenal experiences I’ve had in a long time. I mean, how many people get to live their dream two or three times? The response worldwide, the amount of media, I’ve had over 5,000 emails and text messages from people all over the world who were inspired by what happened.

SLAM: Did you expect the reaction would be like that or what were you expecting?

NL: “Well, that’s a great question. I mean, I didn’t go into it with an agenda or anything like that or waiting for a reaction. Bill Laimbeer said, “Would you like to play?” My natural instinct was, “Yes. I’d love to play.” I’m so passionate, I love the game, I’ve been training, I’m healthy and I thought “what a great opportunity.” I mean, why should I say no? I mean, as long as I’m not going to embarrass myself and act like I’m 100-years old, why would I say no?”

“It’s the same to me as Oprah’s going on vacation and wants you to host her show for a day. I wouldn’t say no. I’d go, “Really? Ok, that’s cool.”

SLAM: Would you explain your relationship with Mannatech? Why are they a company you support?

NL: This is a true story. Back in 1996, I was doing an appearance and George Gervin and Otis Birdsong were at this appearance. I just mentioned to them that I was thinking about coming back and playing in the WNBA and I was going to be 39. Otis just asked if I was taking any products or vitamins and I said, “No, why?” He said, “You have to try this stuff. You won’t believe it.”

So, I ride it out and take it the way I’m supposed to take it. I was then on a touring team that played 18 games in 21 or 22 days. I get out there, start playing and I’m 38 at the time. All my teammates are 21 or 22 years old. We’re going through five hours a day of practice and the coach of the team says, “What are you on? What are you taking?”

He says, “You’re in better shape then these players, and you don’t get tired at these practices.”

So, I called Mannatech and asked, “What am I taking? I’ve waited 17-years to play in the WNBA.”

They told me, “Nancy, this is all natural,” and they got me on the phone with their doctors. I went over to Mannatech, I looked at all the ingredients and these people couldn’t believe my energy level. Everything about my conditioning, my recovery time and then some of my teammates even wanted to get on the product. When I ended up coaching in Detroit, my whole team was on it. It was really kind of cool.

So, I’ve been taking this product since 1996. I swear by it. Anybody who knows me, I give the product to. You have to take this for 120 days because you won’t believe how you feel. Your recovery time, your stamina, your immune system and your overall health.

Players that have played for me or players I’ve trained have all at one point or another been on Mannatech. So, to be quite honest, that’s just a way of life for me. In my mind, I wouldn’t be able to do what I do without having been on these products. Like I said, it’s not an experiment. I’ve been on them since 1996. I would never take on a challenge without that being a part of what I do. They’re the best. They’re simply the best.

I’m just telling you, try it for 120 days. These people do not pay me, okay? Usually I like to brag and people are paying me to brag about them, but these guys don’t pay me. I want them to pay me, but that’s what I’m telling you. I couldn’t imagine doing what I do, getting up in the morning and not having that be the first thing that I do.

I know I sound like a shameless endorser, but I’m really not. I mean, they do provide me with my products. I will say that, but beyond that, that’s the extent of what’s happened. If I didn’t think it would help me, I wouldn’t take it. I’ve never tried anything other than this in the last 12-years.

Check out Part Two of Nancy Lieberman’s interview with Stephen Litel later in the week where they discuss the WNBA season so far, as well as thoughts on the remainder of the year.