Nneka and Chiney Ogwumike helped one another become forces in the WNBA. 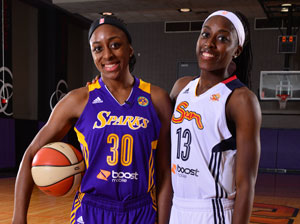 Nneka and Chiney Ogwumike didn’t hold one-on-one duels in their backyard as kids, leaving the loser to wash dishes after dinner.

The Houston natives weren’t coordinated enough to catch the ball then, anyway, hooked on the Discovery Channel long before they ever learned of the Rockets.

Even when the pair began to develop a nose for the ball, snagging rebounds out of the air with ease as preps, their relationship continued to be more collaborative than competitive.

So when the Stanford grads faced off for the first time as pros last summer—Nneka for the Los Angeles Sparks and Chiney for the Connecticut Sun—Chiney accidentally clapped when Nneka made a free throw.

The Ogwumike sisters are the only pair of siblings other than the NFL’s Peyton and Eli Manning to both be drafted No. 1 overall in a major sports league. Nneka and Chiney earned WNBA Rookie of the Year honors in 2012 and 2014, respectively, and were both All-Star selections last season.

Blending athleticism with skill to outhustle opponents in the post, the forwards boasted near identical stat lines in 2014: Nneka averaged 15.8 points and 7.1 rebounds on 52 percent FG shooting while Chiney posted 15.5 points and 8.5 rebounds on 53 percent shooting from the field.

“Those two possess intelligence and savviness and they’re very persistent,” Sparks coach Brian Agler says. “There’s no quit in how they play.”

Years of practicing together cultivated that work ethic.

As the older sister, Nneka would teach Chiney the dribbling moves she learned at AAU practice. Chiney, in turn, constantly sought advice: How’d you get position to box out? Where does my foot pivot on that turnaround jumper?

Nneka was Chiney’s compass on the court, guiding her in the right direction and steering her back when she fell off course.

“I’d envision myself doing the things she’d done,” Chiney says. “She sort of goes through the fire and then I sort of ride her coattails.”

Nneka would once again show her younger sister the ropes in college, as the duo led Stanford to back-to-back Final Fours in 2011 and 2012. Whenever Nneka wasn’t in a practice drill she was shouting direction to Chiney: You’re too early, Chiney! Swing the ball. Sprint back on defense! Use your left hand!

“We would joke that we coached Nneka, but Nneka coached Chiney, because she was always the first one to correct her,” Stanford associate head coach Amy Tucker says.

The pair has since blossomed into two of the WNBA’s brightest lights, each thriving for her own respective team.

Heading into her fourth season for the Sparks, Nneka has morphed into a defensive leader alongside two-time MVP Candace Parker. She takes pride in doing the dirty work of setting screens, guarding an opponent’s marquee player and battling inside for offensive boards.

“She’s quick and strong and has good size,” Agler says. “But I think what separates her from everybody else is the fact that she knows how the flight of the ball is going toward the rim and anticipates where the ball will come off the rim.

“You put all of those attributes together and that makes one of the greatest offensive rebounders in the world,” he adds.

Chiney, who was thrust into a focal role as a rookie last season when Tina Charles was traded to the Liberty, also proved to be tough to keep off the glass. Fighting for position several seconds before a shot is even released, she finished second in the league in offensive boards with 123.

Connecticut relied on her not just for buckets and boards, but for energy.

“She plays with tremendous passion,” Sun coach Anne Donovan says. “There’s not one play that she wants to regret, therefore in every play, she plays to her utmost, and that to me separates good players from great players.”

Chiney is recovering from a knee injury, having undergone microfracture surgery in January. Meanwhile, Nneka spent the offseason competing for Dynamo Kursk in Russia, proving to be among the Euroleague’s leading scorers.

As they advance in their careers, both Nneka and Chiney strive to improve their perimeter shooting to be able to consistently hit the mid-range shot.

Helping each other improve is nothing new, as the pair would often stay late after Stanford practices to shoot at night. Turning on music, releasing jumper after jumper, they found comfort simply being on the court together.

“I think if they’re able to make the same adjustments that they made at Stanford, where every single season they got better, I think it’s going to be phenomenal,” Tucker says. “The sky’s the limit for both of them.”