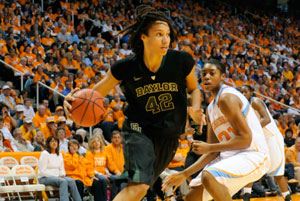 Team undefeated and ranked No. 1 – Check

With numbers like this—and the level of dominance seen throughout their career—you would think that this player would be the talk of the town, with magazine covers, lengthy biographic pieces on ESPN and a theme of celebration. Yet, these numbers and success hasn’t translated into Britsanity, all of which reflects the power of race, gender and sexuality within sport culture.

Unable to transform the narrative, in spite of her amazing (revolutionizing) play, Brittney Griner remains an afterthought within the basketball world. Unable to embody the traditional feminine aesthetic and beauty, yet fulfilling the stereotypes usually afforded to Black male ballers, there is little use for Griner within the national imagination. Her greatness is relatively invisible (outside of hardcore sports fans) because she simultaneously fits and repels our expectations for female athletes.

When Brittney Griner emerged on the national scene three years ago (and even while still in high school), the media focus wasn’t solely on her game, but instead positioned her as a player who was challenging the expectations of female athletes. Unlike the vast majority of celebrated female athletes, she was, according to the narrative, a less feminine “androgynous female” who challenged the “rigidity of sex roles.” Often comparing her to males, the media narrative consistently imagined her as a “freak” and as an aberration, contributing to a story of shock, amazement and wonderment whether Griner was indeed a woman. According to Lyndsey D’Arcangelo, “The world of women’s basketball has never seen a player like this before. Griner has the athletic skills and build of any budding male college basketball star, which has brought her ‘gender’ into question.”

In Brittney Griner, Basketball Star, Helps Redefine Beauty, Guy Trebay highlights the ways in which the dominant narrative of Griner imagine her as not baller, as not student-athlete, but as signifier of gender and sexuality:

“Feminine beauty ideals have shifted with amazing velocity over the last several decades, in no realm more starkly than sports. Muscular athleticism of a sort that once raised eyebrows is now commonplace. Partly this can be credited to the presence on the sports scene of Amazonian wonders like the Williams sisters, statuesque goddesses like Maria Sharapova, Misty May Treanor and Kerri Walsh, sinewy running machines like Paula Radcliffe or thick-thighed soccer dynamos like Mia Hamm.”

While celebrating her for offering an alternative feminine and aesthetic, the media narrative of course represented her in ways limited to female athletes—she was confined by the stereotype of women athletes. Focusing on her body, and how she meshes with today’s beauty stands, all while defining her “as a tomeboy” the public inscription of Grinner did little to challenge the image of female athletes. In purportedly breaking down the feminine box that female athletes are confined to within sports cultures, Griner provided an opportunity, yet as we see the opportunity is still defined through feminine ideals and sexual appeal to men.

The limited national attention afforded to Griner irrespective of her dominance and her team’s success reflects the profound ways that her emergence has not ushered in a new moment for women’s sports. Unable to appeal to male viewers, to fulfill the expectations of femininity and sexuality, Griner has remained on outside the already infrequent media narrative of women’s sports. Even though there are multiple networks dedicated to sport, even though there are magazines, countless websites, and a host of other forms of social networking dedicated to sports, there are few places for female athletes, much less black female athletes. Studies have demonstrated that less than 10 percent (3-8 percent) of all sports coverage within national and local highlight packages focuses on women’s sports.

Substantive coverage and national attention so often comes through sex and sex appeal, where female athletes who are successful at sport (less important) and eliciting pleasure from male viewers garner the vast majority of sport. Matthew Syed (2008) argues that, “There has always been a soft-porn dimension to women’s tennis, but with the progression of Maria Sharapova, Ana Ivanovic, Jelena Jankovic and Daniela Hantuchova to the semi-finals of the Australian Open, this has been into the realms of adolescent (and non-adolescent) male fantasy.” Attempting to elevate women’s sports by telling readers that it is OK to view female athletes as sexual objects, he laments how western culture has not “reached a place where heterosexual men can acknowledge the occasionally erotic dimension of watching women’s sport without being dismissed as deviant.” This sort of logic contributes to the relative invisibility of Griner on the national landscape.

The lack of national attention illustrates that because Griner has not fulfilled this erotic dimension she has found limited use within the national imagination. One has to look no farther than YouTube comments to see the interconnection between the perceived masculinity of Griner, the lack of desire for her as sexual object, and her erasure from the sporting landscape. Unable to fill the role prescribed to female athletes within American sports culture, she is either dismissed as a “male” or a “freak” or used to normalize the Anna Kournakova, Allison Stokke and Candace Parkers’ of the world, who fulfill male expectations.

Reflecting the values of patriarchal society, female athletes who can appear on ESPN and Girls Gone Wild, who can win sport’s title and wet t-shirt contests, receive accolades and celebration. Notwithstanding the initial efforts to elevate Griner to the status of “game changer,” as someone who would redefine gendered expectations of sports, her outsider status highlights the difficulty of this process.

Griner’s inability to crossover to secure mass appeal isn’t purely about gender and sexuality, about dominant expectations of female athletes, but also the ways that her blackness restricts and confines her. Described as tough, masculine and physical, much of which comes from a 2010 incident where she hit an opponent, Griner has faced the burden of race, gender and sexuality.

The history of “white newspapers” is one where the media has “trivialized African-American women’s participation in sport, either by failing to cover the accomplishments of the athletes or by framing the athletes as masculine” (Cookey, Wachs, Messner and Dworkin 2010, p. 142). The efforts to describe, contain and represent Griner through both racial and gendered language is illustrative of a larger history of Black female athletes.

Those who are able to fulfill the dominant White imagination regarding female athletes (to mimic a White aesthetic; to fulfill White sexual fantasies, such as Candace Parker) enters into the public sphere as sexual objects, yet those athletes like Griner, who don’t embody the sexualized aesthetics of White male pleasure, find themselves on the outside looking in at the few opportunities afforded to female athletes. It is no wonder that she hasn’t taken the nation by storm because clearly her game is all that.

David J. Leonard is Associate Professor in the Department of Critical Culture, Gender and Race Studies at Washington State University, Pullman. He is the author of Screens Fade to Black: Contemporary African American Cinema and the forthcoming After Artest: Race and the War on Hoop (SUNY Press). Leonard is a regular contributor to NewBlackMan and blogs at No Tsuris. Follow him on Twitter @DR_DJL.