Mercury cruise past the Liberty en route to clinching the No. 1 seed in the Western Conference. 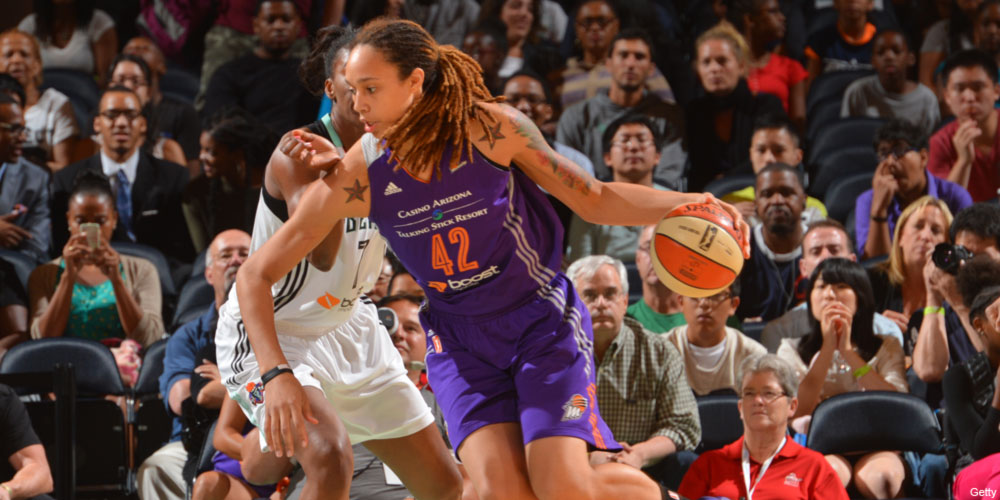 New Yorkers have had their share of dangerous mercury levels in the past—notably in the great Hudson River that runs along side Manhattan. This past Tuesday night, 9,617 people, mostly passionate and faithful New York Liberty fans, sitting in the heart of Manhattan at Madison Square Garden got a new dose of mercury. They watched the best team in the WNBA, the Phoenix Mercury, defeat the gritty and no-quit Liberty 76-64 to clinch the best record in the Western Conference less than one week before the regular season ends.

When playing a Phoenix team with two superstars in Diana Taurasi and Brittney Griner, one basketball strategy might be to pick your poison. The Mercury showed that its potency extends beyond these two players to the team concept. The team game was on display.

The ball seemed to find players in open positions for fluid shots, particularly starter Candice Dupree who shot 9-14 from the floor and reserve Erin Phillips who scored 11 points in 17 minutes of play, hitting 3-4 from the field. Dupree also collected 10 rebounds.

One telling stat is that five Mercury players scored in double figures in a game in which they scored 76 points, and with numbers close to each other (points of 18,14,14,11 and 11). Four players took double-digit shots, but no one shot more than 14 times.

This was no aberration for a team that has five players averaging double-figure points for the season, with Taurasi being high at 17.

And the Mercury leads the WNBA in fewest points scored against a team, at 74.2.

The winner of more championships in professional sports than anyone at 11, the great Celtic center Bill Russell has said that it’s important to like your teammates. In the locker room after the game Taurasi said that the players on the team really like each other.

Hard to believe that point guard and team leader Diana Taurasi is in her 11th WNBA season and is now 32. Her enthusiasm, drive and skill are in high gear. Her UConn college coach, Geno Auriemma was at the game, watching four of his former players, Tina Charles, Swin Cash and Charde Houston on the Liberty, and Taurasi. It was hard to tell whether or not she was dead-panning after the game when she emphatically said Geno had rooted for her.

You get the sense that Taurasi could carry the Mercury if the team finds itself not playing well in a playoff game. Her experience should guide her in knowing what the team needs out of her.

By the way, you get the impression that Taurasi will be playing b-ball forever; she will always find a game somewhere.

There was no celebrating or whooping it up for the Phoenix Mercury after the game and no plans to celebrate later. They had business to conduct in New York and they got the job done. Quietly satisfied with their work, they knew there was still important work in front of them. And the next order of business was to play in Atlanta the next night.

In the third quarter the Mercury lead increased to 17, but the Liberty brought it down to 12 by the end of the third period with Charles scoring only two points that quarter.

In the fourth period, the Liberty kept playing hard and cut the lead to 12 with 2:27 remaining. For a while, it looked like the Liberty had gone to a 2-3 match up zone with Plenette Pierson playing the middle of the back three.

Candidly, Coach Laimbeer said his team was not a good shooting team. The 28-76 shooting, at 38 percent was even below the team’s season average (42 percent). “We get good looks, we just don’t make them,” Laimbeer said.

Although the Liberty is not a good shooting team, too many times player and ball movement became stagnant if the first option on an offensive movement did not pan out.

One other thing for Laimbeer to consider. Are shots also not dropping because the defenses are forcing then to take shots out of the players’ sweet spots or out of rhythm? In other words, are defenses forcing the Liberty to take shots they are given but don’t want, even if the shots are open looks? Not every open look is necessarily a good shot for a player.

It is hard to deny there are individual matchups in the team game of basketball that are exciting. If you grew up enjoying watching Russell go against Chamberlain, watching the 6-8 Brittney Griner and 6-5 Tina Charles go at it promised to be compelling.

Two of the best centers and players in the game, the 25-year-old Charles and the 23-year-old Griner were crucial players on teams that won a National Championship in college (Griner played for Baylor, and Charles won two titles at UConn). Both were overall No. 1 draft picks in the WNBA. They are still very young, and with room to get even better.

They did not disappoint.

Griner guarded Charles the whole 36 minutes Griner was in the game. But Charles, who played practically the whole game, guarded Griner only about half the time—perhaps to avoid foul trouble and also spare Charles’ energy as she carries her team’s scoring burden.

Offensively, Charles came out strong and finished strong, scoring all but two of her game leading 26 points in the first and fourth quarters.

Her 16 first-quarter points came on an array of shots, but tellingly, with two jump shots beyond 15 feet and two shots at 7 and 9 feet out, most were not that close to the hoop. She shot 6-10 that quarter.

In the first quarter, Griner seemed at least a step too slow in getting on Charles as Charles went outside the paint or further away from the basket. Griner was not able to close in her quickly enough to disrupt her shot or prevent Charles from shooting.

When Griner was drafted in 2013, the Mercury who had the first pick in the draft could have picked Elena Delle Donne instead.

Delle Donne, a great shooting and driving forward who led the nation is scoring for Delaware as a junior with 28.1 points per game in the 2012-13 season, has also turned out to be a great pro player.

She helped turn around a Chicago Sky team that went 14-20 and out of the playoffs in 2012 to 24-10 and a first place finish in the Eastern Conference regular season in 2013. She was last year’s Rookie of the Year. (Unfortunately, Delle Donne had to miss 17 game this year due to a reoccurrence of Lyme Disease and the Sky is under .500.)

Selecting a tall center that can block shots, defend, rebound and score, over a scoring forward, was once my unshakeable preference. Such a center had potential to be more transformative of a team and was a rarity, compared to a high scoring forward.

The outcome of the 2007 NBA draft had me rethinking my premise at the time of the 2013 WNBA draft.

In 2007, the Portland Trail Blazers were faced with deciding between forward Kevin Durant and Ohio State center Greg Oden. Portland picked Oden, correctly I thought at the time.

Oden suffered significant knee injuries before and after he suited up to play, which derailed his career. So we don’t know how good he would have been without the injuries.

Durant became such a great, great player—not just a dime-a-dozen scorer—who helped transform his team into a terrific team.

Because of what Durant did (and not what happened to Oden, at least consciously) I wasn’t sure who should be the first pick, Griner or Delle Donne.

Griner dominated in college. She was better and much taller than the players with whom she matched up, and was able to roam the paint area and score, rebound, and block shots fairly easily. At 6-8, with arms stretched up or out, it was difficult for most comers to score against her. Each wing in her span could envelope smaller players driving to the hoop.

Her pro opponents would be taller, stronger, faster, quicker and more agile than her college opponents, requiring her to move better defensively in the half-court.

Each team got the right player, as Chicago already had a terrific center in Sylvia Fowles.

Just two years ago, before Griner was drafted, the Mercury was 7-27, finishing last in the West. They improved to 19-15 in Griner’s first year, and made the Western Conference Finals in the playoffs.

As Charles get going in the first quarter, Griner needed to move better defensively. And she did. Griner, particularly in the second and third periods, stayed attached to Charles as Charles moved outside. Charles did not get the ball much in those periods.

When the Liberty was able to get the ball down low to Charles, Griner’s height advantage and the positioning of her feet kept Charles from getting off unforced shots. Charles was 0-4 from the floor with no points in the second period, and had just two shots in the third, making one.

Charles, who looked tired in the third period, did not get much help from teammates to get free in the second and third quarters. In the fourth period some help came in the way of a low double stack set on the left side of the lane. Charles received some better entry passes in better position. She scored 8 points off of 4-6 shooting in that last period.

Charles could develop a more consistent old-fashioned hook shot—not the jump hook variety—but it is more of a relic at all levels of basketball today.

In the second quarter, Charles played strong defense on Griner who had just one shot.

Griner scored 14 points on 7-12 shooting. She was patient on offense and also showed various types of shots, with a very nice touch. She did “settle” for a number of short to mid-range fade-aways or quasi step-backs when bodied-up down low, as she could not power her way in against Charles or Avery Warley-Talbert. But she can hit those shots.

But there was a glimpse of things that might come down the road. One shot she hit looked like a sky hook. If Griner develops that as a go-to shot a la Kareem Abdul-Jabbar, it could be her power move.

And near the end of the game, Griner made a quick short drive from the left side blowing past Charles for a lay-up. After the game, Griner said she made a good pivot on that shot. With people often asking her about dunking, it was refreshing and revealing to hear a star talk about one of the fundamentals of individual play, the pivot.

Griner had 11 boards and 3 blocked shots. She averages 4 blocks a game. She has a great chance of finishing the season with a record number of blocks. Charles had 12 rebounds.

It’s fun to watch team basketball being played—it is the winning way. But great matchups add to the rooting interest. It would be nice if Charles and Griner could play against each other more than two times a year.