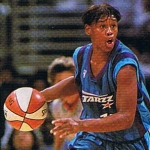 Once I started to write for Slamonline it seemed like everything that I could remember came flooding in, like the fact that there were so many players that have come and gone. Faces that were powerhouses and faces of those who were just happy to be there. The comment, “I’m just glad to be here,” cost a lot of people their jobs throughout the course of my career.

For some, it was an opportunity of a lifetime and for others it was their livelihood. Let’s visit with this for a moment. I mean, some players just wanted the opportunity to say that they were on a WNBA team. Kinda’ like a fantasy camp and we all know what happens when fantasy becomes reality. I couldn’t quite understand that whole mentality. Yeah, the per diem is sweet and so is the car, the apartment, and endless attention from the press but wouldn’t you want that for the duration and not just the moment.

People would literally think that they could come into training camp around 70% ready and be successful. Let me enlighten you. We practiced twice a day the first two weeks of training camp because pre-season is so short (maybe 3 ½ weeks), not to mention media days, doctor’s appointments, league meetings, appearances, adjusting to your teammates, and learning all of the plays. This requires a lot of energy and a strong head.

I remember some of my teammates who would come back for a new season with the same attitude that they had the year before, still out of shape, and acting like they couldn’t get cut. The funny thing about it would be the tears of disbelief when called into the coaches office to be released. Training camp is not a joke and those preparing should prepare well. Here’s the reason why: there are countless people in the world vying for 140+ spots in the WNBA. You have to be good and possess something that sets you apart from the rest. My uncle Skip said to me at a young age, “You must practice hard because there’s always someone out there trying to be better than you.” I took that advice and ran with it from grade school to the pros.

Don’t get me wrong. I’m not trying to scare away the babies but there is power in the truth. Television portrays such an unrealistic view to all of this. Lights, camera, action out in the open but blood, sweat, and tears behind the scenes. The one thing that set me apart and kept the spotlight shining on me was my work ethic. No one out worked me in practice and that was my mentality. This carried over to the game and the rest is in the books.

I really enjoyed this article from the preseason on WNBA.com that outlines how truly successful players work in the offseason.

Ultimately, the WNBA was full of great moments for this kid from Jerzey. Moments that helped define me as a player, as a person, but most of all as a woman. I hope the other players don’t take this opportunity for granted.