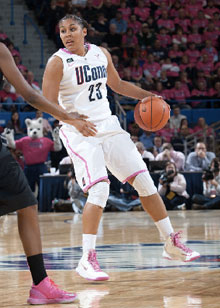 Shooters aren’t born, they are made. Some of the best shooters in the league have some of the best work ethics in the game. Add Kaleena Mosqueda-Lewis to that list. Kaleena as a youth used to wake up and hit the parks with her dad at 5 a.m. before class to perfect her shot. Kaleena can make it rain.

With that being said, let’s not short change Lewis by titling her as just a shooter. Kaleena is a scorer, period. Off the dribble, coming off a screen, in transition—she gets buckets.

On another note, having skills doesn’t necessarily make you a great basketball player. Kaleena’s upbringing has played a huge factor in who she is on the court. SLAMonline sat down with Lewis to discuss everything from how she became so mentally tough, to giving back to her community, to what makes Geno Auriemma a good coach and more.

SLAM: You were the No. 1-rated prospect coming into UConn. Why UConn over California, Duke and Kentucky?

Kaleena Mosqueda-Lewis: UConn, really because of the history that comes with the program. Also, I played with a lot of these girls when I was 14, 15, 16. If I was going to fly across the country I wanted to be with people who were like my family. People who I could be comfortable with.

SLAM: Are you a big WNBA fan? If so, who do you like to watch? Is there anyone you would like to mold your game after on that level?

KML: I’m a WNBA fan. I go to Connecticut Sun games whenever we can. We have seen Tiffany Hayes play. It is definitely a goal of mine to play there after college. I think if you are playing the game, your goal should be to get to the WNBA, and play in the Olympics.

SLAM: Tell me a little bit about your family background, any interesting story you would like to share about them? How involved have they been in your growth as a player?

KML: My parents played a huge role in my growth as a player. My dad took off work to come to my games. He would take off work to take me to the gym when I needed to go. He would wake me up at 5 a.m. in the morning for runs, or go and get shots up. He was there through everything, even switch work hours if I needed to come to the gym with me and rebound for me, or work overtime so he could go to tournaments with me so I would never be alone. He never wanted to miss a game.

Same thing for my mom. If my dad couldn’t do it, my mom was right there. It was like my dad was pushing me, and my mom was the calmer influence that helped guide me toward being the best. To have them pushing me every day and telling me I could do it, I don’t know how far I would have made it.

SLAM: I have heard you are an active volunteer in your community, and you have volunteered at the Blind Children’s Learning Center, Orange County Head Start and more. How important is this facet of your life?

KML: It’s really important to me. I love working with kids. A lot of the times when I’m home I like to go help out at the old elementary school I used to play basketball at. Go out and help my little cousin’s teams in practice. If I have time to squeeze it in I try to help out as much as possible.

I used to be a little kid who used to wanted to learn so badly from people who were older than me or playing longer than me. I feel it’s important because someone helped me when I was younger that I only do the same.

SLAM: You made a smooth transition into collegiate basketball. You led the team in scoring your freshman year and were chosen as the Big East Freshman of the Year. Why do you feel you were able to make the jump so easy?

KML: I think it was due to the fact that my dad taught me going into stuff to not settle with being alright. He taught me not to have a mentality of “this is all I’m getting right now so it is what it is.” I was taught to go into every situation and do your best. I truly work hard to get the most out of each opportunity. Coming from a program like Mater Dei, with a coach that pushed me there, much was expected from us while there. That got me somewhat ready for being here.

Working during the summertime everyone let it be known that a lot was expected from me. It was a lot of hard work, but they made sure I was producing as much as possible my freshman year.

SLAM: Geno is one of the best coaches in the game. I heard he is pretty intense. Tell us what a normal practice is like, film, is it timed? What details do you think make him great?

KML: He is the type of guy where you can mess something up five times, and he will yell at you and be pissed, but at the same time, he’s beating himself up. Sometimes you hear him asking himself, “Why cant I make her do this right?” “What am I doing wrong that she isn’t getting this?” He will beat himself up for however long it takes until we get it right. He just wants us to be good. He wants us so bad to reach our full potential, that when we don’t, he puts it all on himself. When you have a coach like that, who puts such great pressure on himself to change to help us, it’s a big deal. Knowing you have someone like that on your side, that always wants what’s best for you, just makes players work even harder for him.

SLAM: Defensively, seems like you ladies like to apply the pressure all game. How much emphasis does coach put into conditioning?

KML: In practice, everything is full court. Sprinting all the way through. Everything is game-feel in practice. As for me, I actually like going up and down. I find it a lot easier when we can create turnovers and get in the open floor. The half-court game, sometimes allowing the defense to set up, kills momentum.

SLAM: Do you feel you guys are still a work in progress?

KML: Yeah, I feel like there is always more to improve on. We haven’t found all of the key components that we need to be a National Championship team. We are a young team, and make mistakes. Until we learn to eliminate those things, we wont be at our best.

SLAM: What were some things you worked on this offseason? You already have amazing range on your jumper, did you want to become more explosive off the dribble?

KML: A big thing for me to work on this year was my mental approach to the game. I used to get down on myself when things didn’t go my way offensively, and things would snowball from there. I used to go to the gym, play against the guys and when things weren’t going my way, learned how to get through it. Just learning how to move on to the next play. I also worked on finding different ways to get myself open. Off the screen, posting up, whatever it takes to get free.