Candace Parker and Maya Moore are both ready for the emotions tonight's 2016 Finals rematch will bring. 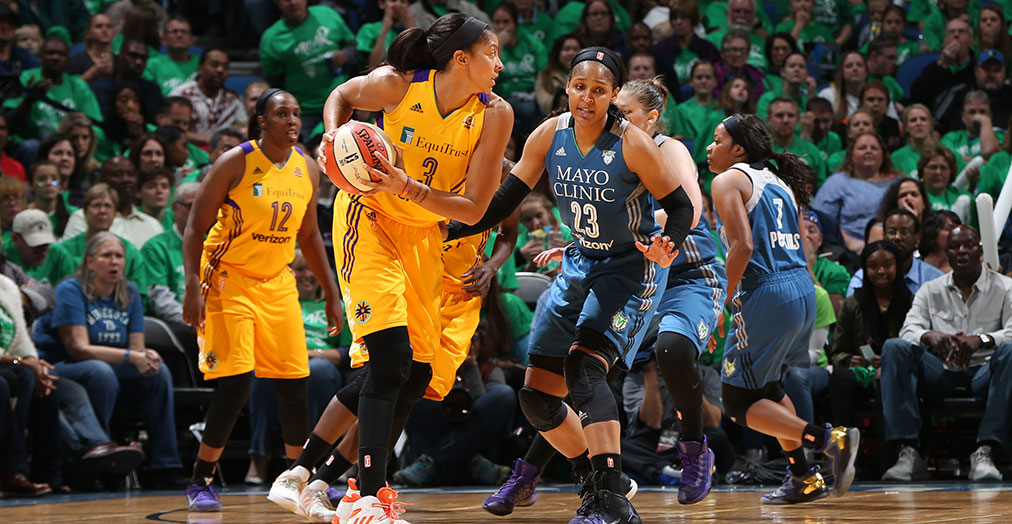 The buzzer had just sounded.

Candace Parker was on the floor, crying. Nneka Ogwumike, who had just hit the game-winning shot, also had tears in her eyes, but she couldn’t move because most of her teammates had jumped on her back.

While the Sparks cried and hugged, Maya Moore walked off the court with her hands on her head. She had just nailed a fadeaway from the right baseline that gave the Lynx a one-point lead with 15.4 seconds left. But it wasn’t enough.

That was the last time the Sparks and Lynx did battle. They meet up again tonight.

The Sparks are 12-3 while the Lynx are 12-1, seemingly on a crash-course for a Finals rematch. Both Parker and Moore know that tonight’s game at the Target Center means a little bit more than a normal regular season matchup.

“As a competitor, you love games like this,” Moore says. “It’s just a lot of energy around the matchup. And the history makes it that much more fun of a game. I’m sure it’s going to show when the lights come on and both teams get out on the floor. It’ll be a very high energy match.”

Moore and Lynx have certainly started the season with a lot of energy. They lead the League in points per game, assists per game and that 12-1 mark is the best record in the W. Moore, Seimone Augustus and Lindsay Whalen didn’t play overseas during the winter and all that rest is paying off. Minnesota’s whole team is on fire.

The Sparks are doing pretty well, too. With Alana Beard’s defense, Chelsea Gray’s improvement (she’s up to 16.7 ppg) and Ogwumike’s bucket-getting, LA’s only one game back in the standings.

“Obviously we realize in the long run this could help us, but also we realize that our focus is getting better and nobody’s going to hoist a trophy [tonight],” Parker says. “But it’s a good measuring point to see where we are against, what is right now, the best record-wise team in the WNBA.

“Being back in the city brought back memories but that was last year and it’s different this year,” Parker continues in a calm and confident tone. “We get excited and play our best against Minnesota and they do against us. There’s a lot of emotion going in.”

Thing is, neither Moore or Parker let their emotions get the best of them in-game. They both do their work with surgical precision, whether it’s Moore’s footwork in the post or Parker shutting down the rim with perfect timing. But tonight’s game means that much. So while there won’t be any tears after the final buzzer goes off, there’ll be plenty of desire for all 40 minutes.

The two superstars clash tonight at 8 EST on ESPN2.