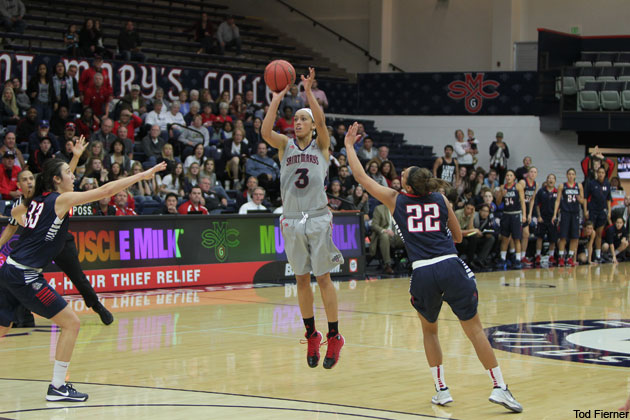 Ask a Saint Mary’s women’s basketball player to describe this team, and you’ll probably be met by silence.

This isn’t a cold shoulder—far from it. Rather, it is an attempt, bound tightly in a few moments of thoughtful hesitation, to find the perfect words to describe what this is all about.

Maybe that was most poignant this past Saturday afternoon, when Saint Mary’s rallied at home to defeat their heated rival, No. 21-ranked Gonzaga, 79-78 in a thrilling overtime contest that kicked off the West Coast Conference season, pushed the Gaels’ record to a program-best 11-1 start and arguably served as their best win so far this season. (They followed that win with an 80-65 victory over a tough Portland team, two nights later.)

After leading for most of the first half, Saint Mary’s endured a withering 12-2 run that gave Gonzaga a 37-32 lead heading into halftime. The Bulldogs would twice threaten to extend that advantage in the second half, but no dice. Somehow, the Gaels always found a way to fight back.

There was precedent for this resiliency. Saint Mary’s is a veteran group led by three seniors—two of whom (Kate Gaze, Jackie Nared) are in their fifth and sixth years, respectively. Gaels head coach Paul Thomas does not appoint captains, but he does denote leaders.

Thomas meets with Gaze, Nared and Danielle Mauldin each week, outlining different ways in which the trio can positively impact the team dynamic. They have a keen sense of how to reach their teammates, how to take the pulse of a situation and act accordingly. That came in handy after the Gaels’ lone loss, a 94-92 heartbreaker just over three weeks ago at Sacramento State, when the team sat in the post-game locker room in a daze of shock.

With tension hanging in the air like thick smoke, the situation easily could have exploded. But Gaze said that the players remained in the room and talked their feelings through. Anger, frustration, disappointment—everything was put on the table and dealt with. Combined with a subsequent 10-day break from games, as the players focused on finals, there was a palpable sense that the team moved forward from this setback. They haven’t lost since, including an impressive 2-0 road trip against USC and Cal State Northridge just before Christmas.

Cut back to the Gonzaga game. With Gaze, the WCC’s leader in assists, struggling mightily (1-10 FG, 10 turnovers), Saint Mary’s somehow found a way to take down the Zags. (In vintage fashion, Gaze, who leads the WCC in assists at 5.5 per game, responded with 20 points on 6-11 shooting—and 0 turnovers—against the Pilots.)

Nared, Gaze’s fellow super senior (both are enrolled in a sports management graduate program), had a lot to do with that. Nared scored 27 points on 10-20 shooting, and hit her sixth and final three-pointer to give the Gaels a 72-71 lead with 0.3 seconds left in regulation. This was one of those shots. Nared had the ball with 16 seconds remaining and her team down by two points. She methodically probed for seams along the perimeter, but with a Gonzaga defender waiting to spring should she have driven into the lane, Nared opted for the spectacular. She pushed toward the top of the key, then used one of her trusty shot-fakes to get her defender into the air. With that second of freedom and space, Nared collected herself and stepped through to nail a shot that looked good the whole way.

Thomas didn’t call timeout beforehand; he didn’t draw that play up. The team practices end-of-game situations on a daily basis, and that sort of intrepid approach is encouraged by the Gaels coaching staff. Speaking afterward, Nared said she couldn’t even process the sequence. There was a sense that it was simply one of those moments that come naturally to the best.

That shot would have won the game, but Gaels forward Amanda Arter, who’d checked into the game for the first time to defend the ensuing inbounds play, bowled over Gonzaga’s Lindsay Sherbert as Sherbert tried to set a screen. Gonzaga was in the bonus, but Sherbert only managed to hit the front end of a 1-and-1, forcing overtime.

It was the worst of gut-checks, to shift from game-winning euphoria to the prospect of a taxing overtime period in the span of a few ill-fated minutes, but the Gaels recovered quickly and embraced the challenge. “We wanted to show how good of a team we are,” Nared said. “We wanted to win super-bad after [Sherbert’s free throw], and we pulled it together and won.”

Danielle Mauldin might have been the best embodiment of that ethos. Mauldin joined Nared (11 rebounds) in the double-double column for the day, adding in a career-best 23 boards to go along with 24 points—14 of which came from the free-throw line (she attempted 17 in the game.)

Nursing blisters and bruises after another game spent banging in the post, the undersized 6-foot forward, who leads the conference in rebounding (14.2) and is third in scoring (18.9), said there is a different energy exuding from this team. “We’ve worked together since summertime,” said Mauldin. “I love playing with every one of these ladies. I’d do anything…I’d do anything to keep us together. This is a great year, and I just enjoy playing with them.”

Mauldin was nearly unguardable from the start of the second half onward, and scored five of the Gaels’ seven points in the overtime period. (Rising sophomore Lauren Nicholson, who finished with 12 points and 6 rebounds, provided Saint Mary’s other bucket.) “(Gonzaga) was probably hungry for this game, but we were starving after that win,” Mauldin said. “We were going to do anything we could to get back into it. We came together, and we played as a team.”

There are basic tenets Thomas has worked painstakingly to implement in his eight seasons at Saint Mary’s, and perhaps it was fitting that many of them were showcased even when his team was not at its best. The Gaels hit 23-29 free throws (79 percent) to Gonzaga’s 6-14 (43 percent), reaching one of Thomas’s goals—to make more free throws than the opponent attempts.

Armed with so much experience, the Gaels excel at self-diagnosing and making sufficient adjustments. They know how to stay within distance and make a run to overturn a deficit. They possess the necessary grit and mental fortitude to see out tough encounters. “We were very, very inconsistent today, but the one thing we were consistent at was not giving up,” said Thomas. “I’m very pleased at that.”

In an age of advanced metrics, where everything can be measured with a stat, cohesiveness remains the rare un-chartable phenomena. Instead, it passes the most important eye test in basketball, and it pervades this Saint Mary’s bunch, which is now on the verge of the top-25.

The Gaels know exactly what that ‘thing’ is—it’s what they scour their minds for in attempts at an explanation. But this is a thing that is always best shown, or seen. It’s the nine or so players from the Saint Mary’s men’s team watching on from the stands, their coaches in attendance as well. When they leap from their seats in jubilation after Nared’s last-second shot, and again after the game is finally won, you begin to see why Gaze describes both programs as one family. It’s just a natural dynamic that can help players push through a game, even when they’re not at their best. It can help a team stay the course.

“I think this is where we’re at as a program,” said Thomas. “Somebody’s going to have to beat us—we’re not going to give in. That’s just the character of this team.”

Thomas spoke to his team at length in the post-game locker room. While his disappointment at instances of missed execution carried to the reporters gathered outside the walls, there remained an overriding message he wanted to impart, which he reiterated several times: This is a special group.

That was in evidence against the Zags. After Gonzaga leading scorer Haiden Palmer burst for 28 points, Saint Mary’s held her to three points for the final 17 minutes and 30 seconds of play (including overtime).

Palmer finished with a game-high 31, but the Gaels stopped her when it counted. The GU senior guard had the ball in her hands with OT winding down and the shot clock turned off, Saint Mary’s up by a point. Undaunted, the Gaels forced Palmer into two contested shots, both of which missed badly. That kind of sequence says something similar to Nared’s clutch shot at the end of regulation.

Nared, who transferred to Saint Mary’s from Maryland, stood outside the locker room speaking to the media minutes after the game had ended. A throng of fans pressed up against the doors to her left, waiting for an autograph from the WCC’s leading scorer (21.4 points).

“This is the closest-knit team I’ve had since I’ve been at Saint Mary’s,” said Nared, who is in her fourth season in Moraga, and third playing. “It’s an amazing group of girls who really want to play well—and play for each other. It’s an amazing feeling to have this.”

Maybe that extends toward a desire to push into the NCAA Tournament. That’s the next logical step for Saint Mary’s, which has featured in the WNIT the past four seasons, making a run to the quarterfinals in ’12-13. They have not reached the Big Dance since ’00-01.

This time around, they have a collection of battle-tested, top-tier talent. But there has to be something more than mere production to push a team over the top. These Gaels have that, and that just might be enough. 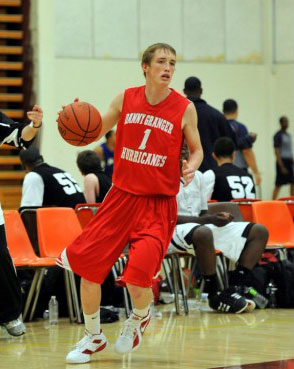 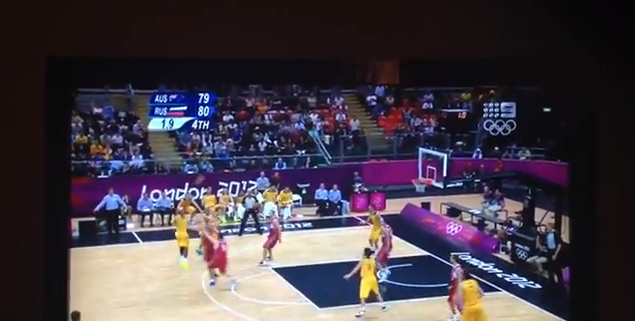