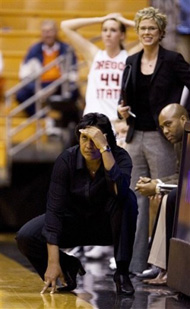 * You can’t ask for more. It looks like UConn will try to tie or break UCLA’s record 88-game winning streak at Stanford next December. The way the schedule maps out, the Huskies will have won 87 or 88 games (barring an upset of epic proportions) when they arrive at Maples Pavilion.

Both teams, of course, will look considerably different than they did in the NCAA Finals, but each will reload with quality freshmen. Stanford gets 6-3 post Chiney Ogwumike (yes, Nneka’s sister), most services’ player of the year, and UConn adds spectacular guard Bria Hartley, so there will still be plenty of starpower.

A bit of advice: Get your tickets early.

* First Washington, now Oregon State. Tia Jackson was plagued by transfers and allegations of being too tough on players in Seattle, and now the same scenario is being playe

d out in Corvallis. LaVonda Wagner has had five players transfer out this year (14 in her time there) and one assistant coach leave — and Kate Lanz, a player who’s leaving, said “It wasn’t a positive environment.” It was clear she wasn’t talking about wins and losses.

This is bad news for the Pac-10, as Wagner has three years left on her contact, and it’s unlikely Oregon State will buy her out – after all, Washington didn’t want to pay two years of Jackson’s deal, so it looks like she’s there for a while too. The result will be two teams that won’t be nearly as competitive as they should be, which means seven of the 10 teams (Washington State has almost no chance) won’t be anywhere close to as good as the West Coast Conference’s Gonzaga, and probably not as good as the Big West’s UC Davis or UC Santa Barbara.

Now, I’ve always gotten along with Wagner, and Washington has treated me well despite my criticisms, and I have no idea what’s actually happening at these schools. Maybe it’s spoiled players, maybe it’s frustration because the kids aren’t as good as they thought they were – but the bottom line is that we have losing programs shedding players in a league that desperately needs all the help it can get.

The business end of college sports starts with winning, and then with fans in the seats, and Washington especially is a school that has the pieces in place to do both. The Pac-10 can live with a couple teams struggling, but if Arizona (which didn’t want to pay much money to replace Joan Bonvincini) and USC (Michael Cooper?) are added to the trio of existing underachievers, things are going to get worse in the Pac-10 before they get better.

* More West Coast confusion. USF (which has always stood for the University of San Francisco and not some upstart in Florida) just hired Jennifer Azzi instead of Mark Trakh, who had been at USC and was unreasonably fired by athletic director Mike Garrett despite a series of devastating injuries. Debi Gell-Mann, who came from Stanford, opted to go with Azzi, who played at Stanford way back when, and once was a well-known figure in the game.

But Azzi has never coached at any level, and is a complete unknown to potential recruits – in fact, I’d be surprised if many coaches had ever seen her play. She has been doing motivational speeches, and maybe she can revitalize USF (when South Florida has alumni to match Bill Russell and KC Jones, then the Bulls can lay claim to the acronym) – but the cupboard is bare and the Bay Area isn’t swimming in kids who can vault the Dons past Gonzaga and St. Mary’s, which is just 30 miles away from USF.

I don’t know what Gell-Mann was thinking, but she has not made herself popular at USF, and this is yet another controversial decision. For her sake, the Azzi hire had better work out, or it could be the tipping point.