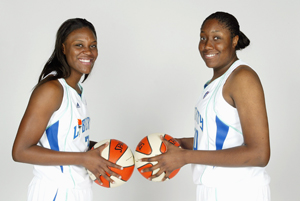 While most of the WNBA teams have gone fishing, four teams remain alive in the Playoffs. The Libs kick off with Game 1 of the best-of-three EC Finals tonight at the Garden at 7:30. After a break from blogging, Liberty players Tiffany Jackson and Jessica Davenport check in about making the Playoffs as well as a cool off-court adventure.

Hey y’all!!! It’s that time of year. PLAYOFFS!!! We are locked in and ready to keep it going. As most know we are in the Eastern Conference Finals. We had a close but successful series with Connecticut, winning 2-1. Unfortunately, I was unable to play in the series, due to an injury. I am extremely anxious to get back on the court. Hopefully you guys will see me

in a Liberty uniform sooner than later. Next on our agenda is Detroit. They are a great team and we will have our work cut out for us. Hope to see you all Friday night at the Garden.—Tiffany Jackson

Hey Liberty fans :). It’s been awhile since we have talked and a lot has gone on. I got the opportunity to do some cool stuff with Tall Girl clothing a few weeks ago, and we (tiff and I) had a a meet and greet at the Tall Girl location in White Plains Galleria Mall. We took some pictures in their clothes and it all came out nice. (Thanks, Maria, for all your help). I also learned that in their magazines their models are only like 5-10 or 5-11. I don’t consider that tall LOL. They need some 6-4 models! That is tall LOL.

Also, me and Tiff did a cool thing with a company called Brand Affinity Technologies (BAT) a few weeks ago. More about BAT can be found here. It basically was a photo and video shoot in front of a green screen and they have a database that a lot of online marketers can tap into and possible use our images to represent their product. The company explained to us how a lot of money goes into online advertisements and this platform will help get our images out there, so hopefully you see me on a computer screen near you soon! 🙂

Last but def not least, WE ARE IN THE PLAYOFFS! What a great feeling to advance to the Conference Finals, but we still have a lot of work to do to finish this  season strong and to win a title. Well, I think that’s about it for now…I’m out.—jd50