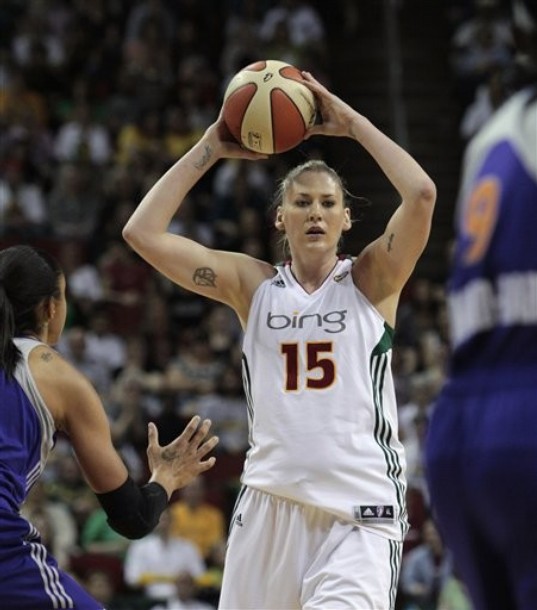 Ironically, The Downward Spiral is probably the worst way to describe Lauren Jackson on and off the court. The album centers around a dark and heavy metaphorical journey for writer Trent Reznor dealing with melancholic themes throughout. At times, it can be depressing and weary. But there’s nothing depressing or pessimistic about Jackson; if anything, The Upward Spiral would be a much more fitting title for Jackson’s career.

It’s not just the success she’s had on the court that makes Jackson beloved by millions worldwide; it’s who she is as a person. Jackson lights up the room when she enters and there is a genuineness about her that fans have come to treasure over the years. After capturing her second WNBA Championship in 2010 (and third MVP), Jackson is cementing herself as one of (if not the) greatest women’s basketball players of all-time. Her legendary status is, literally, increasing day by day.

“I’m no legend or celebrity,” Jackson says, immediately shrugging off the accolades.

Would you expect her to say anything different?

Lately, the “in” thing to do is compare Jackson’s game to Dirk Nowitzki’s in the NBA. Admittedly, the similarities are probably too obvious to ignore even though Jackson is likely a better passer and runs the floor with greater efficiency. Jackson and Nowitzki are two of the best shooters in the history of the game and utilize a unique, brilliant skill set for their size that’s unrivaled in their respective leagues. They both possess a quiet intensity on the floor and humble, modest personalities off it.

Make no mistake about it, though – they share an insatiable thirst for winning.

“It’s just something innate that’s inside of me,” says Jackson of her competitive fire. “I am competitive to a fault on the court and I guess that is sort of a driving factor for me. The game has been in my life for so long…I’m not quite sure what I would do without it. In Seattle, I have a great relationship with my teammates and the coaches and it’s fun to be around them everyday. We have so many personalities that there is never a dull moment.”

In a sense, Jackson has redefined the center position in the WNBA. Like Nowitzki, Jackson can operate in the post or on the block with an array of moves but she can also extend the defense out along the perimeter with her exceptional shooting ability. There really isn’t a proven, effective way of guarding her since her shot is so difficult to defend.

More significantly, though, since her debut in the WNBA in 2001, Jackson has ushered in a new way of looking at women’s basketball. She’s tough. Gritty. Dominant. Multifaceted. Original. Her versatility extends throughout the entire court. She’s quick enough to take you off the dribble but smart enough to know she doesn’t always need to.

Because of her originality as a player and as a person, there isn’t, and will never be, another Lauren Jackson.

For lack of a better term, Jackson is cool. She makes women’s basketball cool to those who, perhaps, didn’t think so before. That’s just the aura she exudes and it’s certainly not a conscious thing on her part. She has multiple tattoos. Loves Nine Inch Nails. She’s pursuing a degree in psychology and wants to do more social work once her basketball career ends.

She is unique in every sense of the word. And in a good way. Lauren Jackson is the quintessential example to share with someone who has false, judgmental notions about female athletes.

“The sport itself is evolving into something special,” says Jackson about women’s basketball. “So many wonderful athletes are coming out of college and dominating the game; it’s a shame to think people are missing out on the WNBA because they have preconceived ideas about who we are. Young girls and women who want to play basketball have this awesome opportunity to aspire to. It really is an honor. I’d like to think that we really are paving the way for the new generation of ballers to reap the benefits and enjoy the game as it continues to grow.”

Will she add more championship rings (like this one designed by Blue Nile) to her collection? As Jackson’s upward spiral continues, it would be wise not to bet against her.