The WNBA and Diversity 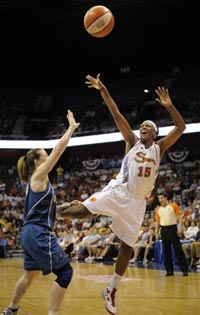 The WNBA continues to lead the way in the University of Central Florida’s Institute for Diversity and Ethics in Sport annual report card. In fact, the WNBA has earned the highest combined grade for any sport in the study since 2004.

Richard Lapchick, the leader of the study, says “The WNBA remained as the best employer overall for women an

d people of color in any sport.”

Here are a few of the highlights in the 2010 report on the WNBA:

– The 2010 WNBA Racial and Gender Report Card received a combined grade for race and gender of an A+ by earning an A+ for gender and an A for race.

– For the second consecutive Report Card, the WNBA had the highest number of A’s as well as the lowest number of grades below an A in all categories in the history of the Racial and Gender Report Card.

– Sheila Johnson was the only person of color considered an owner during the 2009 and 2010 seasons. In 2006, Johnson became the first African-American woman to hold any ownership in a WNBA team when she was named managing partner of the Washington Mystics when Lincoln Holdings, LLC acquired the team from Abe and Irene Pollin. Ms. Johnson owns approximately 6-7 percent of Lincoln Holdings.

– Donna Orender remains the only woman president of a professional sports league.

– The number of women in the CEO/presidents role increased from five to six in 2009, and remained at six in 2010.

– With the relocation of the Tulsa Shock from Detroit, and the subsequent hiring of Nolan Richardson as the head coach and general manager, the league added an African-American to increase the people of color holding leadership positions.