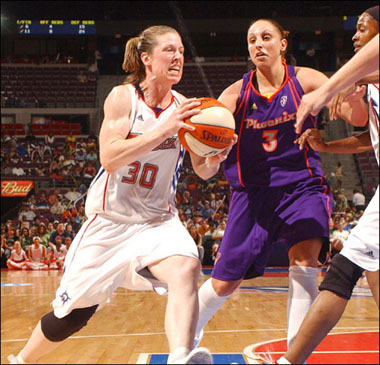 Detroit was singing a tune and dropping points like they were hot. I guess if I could associate it with any song it would be “Girlfight.” The first game is a wrap and Detroit is up 1 – 0 by earning an impressive 108 – 100 victory at the Palace in Auburn Hills. There will truly be cat scratching tomorrow afternoon for game #2. It would be good for the league if Phoenix wins the championship, especially for marketing purposes but Detroit has a plan and Bill Laimbeer is navigating the ship.

Detroit struggled in the first half. Katie Smith and Deanna Nolan had a problem with the zone defense but something magical always happens at halftime. I mean really, if you look at it you can see how a different team comes out of the locker room every time. I don’t know what that coaching staff says or does but it works. Collectively, the team bands together and the performance put on without Cheryl Ford or Deanna (11 points) having a monster game was very impressionable.

Katie Smith went off for 22 points, 6 rebounds, and 4 assists. Plenette Pierson and Kara Braxton combined for 45 points and 22 rebounds. Swin Cash had 13 points and 4 rebounds while Shannon “Pee Wee” Johnson had 4 key assists. The Shock bench outscored the Mercury 50 – 12.

The Mercury simply had no chance especially with Diana Taurasi in foul trouble, mouthing off to the refs on every call, and losing her cool which is a part of Detroits’ shock treatment. I love her game. She’s a good player. She will be a great player in the pros when she matures which is sure to come. Bottom line is this: No contribution from the bench and Diana out of the game = Detroit as Champions. Cappie Pondexter is amazing and Penny Taylor is a beast. Cappie finished up with 27 points, 4 rebounds and 5 assists while Penny had 32 points, 9 rebounds, and 7 assists. You have to credit the Shock defense for Diana’s 10 points and frustration, but she’ll be back without a doubt.

I knew that the lack of depth would eventually catch up to Phoenix and I’m sure Ann Meyers Drysdale will address it in the off season but for now, someone else has got to get hot or it’s lights out.

There are people still trying to figure out how the Mercury lost. I guess the excuse will be a curse dating back to General Manager, Jerry Colangelo and the 1976 Suns. Everyone including the commentators are banking on Phoenix winning the five game series but the fat lady may sing better in Motown.

My good people we have great playoff performances in our hands, but let me reflect for a few minutes cause you know your girl has got to vent about some things. I already realize that I am not one of the WNBA’s favorite former players right now because of the truth that I speak but so be it. Prayer and confirmation led me to the “Do the Right Thing” article so if you didn’t like what was said, take it to the man upstairs. I look around on their site for the truth and history and it’s not all there so here I am to tell it. Somebody had to be Adrienne Goodson and I will play her part until the end.

I often wondered if my articles were being read by anyone over there and they are. I know this because of how the comments have changed on television, how the Aussies (Penny Taylor) are being commented about, how Cappie Pondexter is now being uplifted, seeing Jennifer Gillom (former player of the Phoenix Mercury) at an event, and so forth. This is what I’m all about and that’s to create change and make people realize that their is a third eye in the universe who sees all that you do and you will be held accountable for it eventually. Blood, sweat, and tears is the foundation of the league and was done on the backs of many great women. I can’t let that be pushed aside. Yeah! the league has a new face but you are where you sit because of what was done in the past.

There are a lot of subjects up next but they will have to wait for after the playoffs. Some things will be revisited and some things will be new. I will tell you this though, “I will speak of the truth and I will have exclusive and powerful interviews with players”. Remember the third eye. I was the one who got fined for wearing it on my headband in 2002. You didn’t understand it then but you do now.

To all of my fans, supporters, and non-supporters I just want to say thank you for bringing out the best in me. Motivation comes from many places so we’ll always keep it moving over here in the Hoop Reality forum with exciting news, basketball updates and much, much more so stay tuned. The best is yet to come.