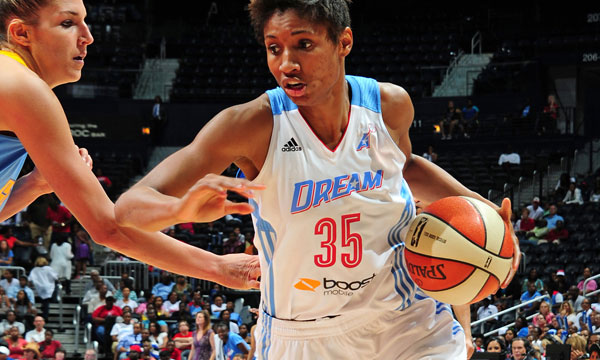 With the “big three” entering the WNBA this year, the hype leading up to the 2013 season has been the highest it’s been in a while, maybe ever. Rightfully so, as Brittney Griner, Elena Delle Donne and Skylar Diggins play different positions, but all can dominate a game and make an immediate impact.

With an intruding blend of grizzled vets and rising stars competing in the W, the league is the best it’s probably ever been. Here are 10 stars who are making a push for MVP this season:

McCoughtry has been the most dynamic player in the WNBA this season. The Dream play at a relentless pace on both sides of the floor, causing boatloads of turnovers each game. This style of play allows McCoughtry to get in the open floor and create—something she does very well. The Louisville alumna is averaging 21 points per game and also dishes out 5 assists per night. The only down point is her turnovers. McCoughtry turns the rock over an ugly 4 times per game, but she’s getting that back—averaging 4 steals as well. The Dream are 8-1, which is the best record in the WNBA.

CP3 has been sensational this year for the Sparks. Los Angeles has a handful of offensive weapons, which at times, can hurt her scoring average. But Parker still finds a way to impact games. Last game against Washington, Parker filled up the stat sheet with 20 points, 7 rebounds, 4 blocks and a steal. The Chicago native is WNBA’s best all-around player, and could be in the hunt for MVP and Defensive Player of the Year.

You don’t have to average 25 points to dominate a game, and Syl Fowles proves that statement true night in and night out. The Sky are in the hunt for their first Playoff birth in franchise history due to Fowles’ dominant play in the post. Fowles is averaging only 14 points, but her 13 rebounds and 3 blocks per game round out a nice stat sheet. With Fowles shooting over 51 percent from the field, look for the Sky to call her number more on offense as the season progresses.

Maya Moore is coming into her game this year. Last year she was dominant in the second half of the season and has continued to score at a rapid pace in the early parts of this WNBA season. Moore averages 19 points and 7 rebounds per game, and the former Huskie is red hot from downtown this year also, shooting 47 percent from deep. Minnesota has the best record in the West, and will be on the hunt to reclaim their title from Indiana this year.

The Mercury and Taurasi got off to a slow start this year, but all has changed the past four games. The former Huskie exploded in the past two games with 31 against Washington, and 18 points, 9 rebounds and 8 assists against San Antonio. Phoenix has a lot of weapons on offense, which make it very hard to solely lock in on Taurasi. The electric wing will only continue to get stronger as the season progresses.

Our Diary keeper has gotten stronger as the season progressed for the Liberty. Cappie loves to mix it up in the paint, snatching down 5 rebounds per game this season. When teams lock in on her offensively, Pondexter has shown the ability to find others with 4 assists per game. The Chicago native has struggled some shooting the ball, but look for this to improve along the way. The Liberty will lean heavily on the veteran guard on their 10-day road trip.

Griner may have gone first overall, but Delle Donne has played the best ball of the rookie class in the early part of the season. With Epiphanny Prince out for a month, the Delaware native has stepped up her game on the offensive end and been a fantastic number one option for the Sky. Coach Pokey Chatman has show great faith in Delle Donne, throwing the rookie into the fire early, as she averages over 32 minutes per game. The forward has shown much improvement on the defensive end, averaging over 2 blocks per game.

Latta started out the season red-hot but has cooled down some as of late for the Mystics. Coach Mike Thibault puts Latta in the pick-and-roll situation a lot, and her quickness and ability to shoot the ball from deep make her a chore to defend in those situations. The Mystics are 4-3 and hold a playoff spot in the East, which was something many didn’t expect for this team. The mentality of this team has changed since the arrival of Latta.

Tina Charles has been a double-double machine for the Sun. Unfortunately those monster games haven’t resulted in many wins in Connecticut as of late. The loss of Asjha Jones this year has had a big impact on this team early in the season. Charles is also shooting 39 percent, close to 10 percentage points under her career average. This will have to improve for the Sun to get back in the playoff race and Charles to win back-to-back MVP titles.

Glory Johnson has been one of the best surprises this year in the WNBA. Everyone saw the potential of the forward while at Tennessee, and now we’re starting to see the results on the floor. Glory shoots a solid percentage on the year, rounding out at 45 percent from the field. Johnson earns her touches down low with a monster effort on the boards, averaging 10.5 per contest. The Shock have been getting better as the season continues. Look for this team to rack up more wins upon the return of center Liz Cambage from an ankle injury.