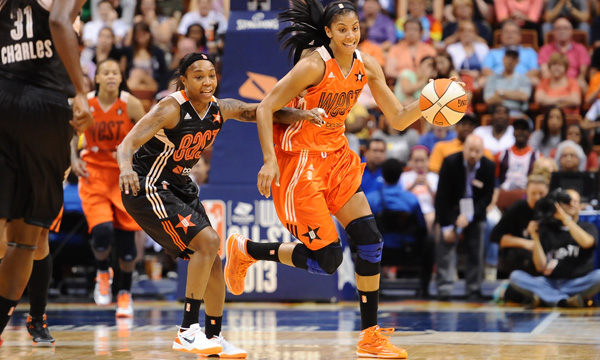 With the All-Star break over and games back in full swing, players will look to push their teams into the playoffs and cement themselves as MVP candidates.

The star-studded weekend event in Connecticut was dominated by forward Candace Parker, who put on one of the best All-Star performances of all time with 23 points and 11 rebounds. Parker has been spectacular all year, and sits atop of the MVP rankings for yet another week. The race is much closer than many would think, as Angel McCoughtry and Tamika Catchings are nipping at Parker’s heels with their great all-around play.

Parker has been out since the All-Star break with a wrist injury, but her performance in the All-Star game was one of the best ever. Parker dominated the exhibition game with 23 points and 11 rebounds, locking in the MVP of the game as well. The Sparks are 3.5 games out of first, and will look to make a push for first place and home field advantage in the playoffs upon Parker’s return.

Atlanta lost a tough one against Phoenix on Saturday, but McCoughtry did all she could to put her team in position to win. The Louisville alumna was unstoppable against the Mercury, pouring in 33 points and 8 assists in the game. Atlanta is 5-5 in their last 10 games, but has suffered injuries to key players in Tiffany Hayes and Sancho Lyttle. Look for the Dream to rebound and McCoughtry to make a push at the MVP trophy as the season progresses.

The Fever started out the season 1-7 but held strong and have turned things around. The have won seven of the past 10 games and sit at third in the East. A lot of the credit for this team’s turnaround can be given to Tamika Catchings. If the Fever can get hot and lock in a top 2-seed, Catchings may be bring home the MVP trophy. Her impact on both sides of the floor puts her team in position each game. Last game against the Sky, Catchings filled up the stat sheet with 18 points, 8 rebounds and 3 steals and a block as the Fever won 64-58 in Chicago. The only knock against Catchings at the moment is that she shoots a tick under 40 percent from the field, but with players slowly coming back from injury, the former Lady Vol will be able to pick and choose her spots better. Expect her percentages to rise and look for the Fever to make a run in the upcoming weeks.

All eyes are on Elena Delle Donne, but center Sylvia Fowles may have the biggest impact on the Sky. Fowles is super efficient offensively, shooting 57 percent from the field and when she’s on the floor, the Sky are +23. On the glass, Fowles is unstoppable, averaging 11.7 rebounds per night—4 of them come on the offensive glass. The extra chances the center gives the Sky make this team very hard to slow down.

The Lynx are 17-3 and undefeated at home this year. Whalen has led the charge at the point this year for the Lynx. When Seimone Augustus went down, Whalen was the one to step up offensively and put the team on her back. The crafty wing is averaging 16 points per game, but also keeps her teammates involved dishing out close to 6 assists per contest. All eyes will be on Whalen to see if she can keep up this scoring now that all pieces are back on the floor.

Taurasi has been on a tear this year, as she leads the league in scoring and is top-five in assists. Unfortunately this hasn’t led to as many wins as projected, which is why she sits so low on the list. Taurasi has also struggled to make an impact on the defensive end, as she is well below her career averages of a steal and a block per night. One of the biggest issues may be the fact that the Mercury are horrible at home, currently sitting at 4-6 on the season. For the UConn alumna to be considered seriously as an MVP candidate and the Mercury to solidify themselves as contenders, Taurasi will have to find ways to take the team to another level. With recent injuries to DeWanna Bonner and Brittney Griner, a lot of pressure will be on Taurasi the next couple of games.

Delle Donne has had the biggest impact of all rookies this year. It was sad to see her go down with a concussion right before the All-Star game, but hopefully the time off allowed her legs to get some much needed rest, as Chicago makes a push heading into the second half of the season. Delle Donne returned last game, but looked a little rusty with 12 points and 2 rebounds in a loss against Indiana. The explosive wing will find her groove again as she catches up to game speed via practice and upcoming contests.

The Liberty found themselves down 14 last with 8 minutes left in the fourth against the Washington Mystics. Pondexter led the charge with a key four-point play, sparking a 93-88 comeback victory for New York. Pondexter made the game look easy all night long, with 21 points and 8 assists in the contest. The Chicago native has shown great balance in her game as of late, mixing up the jumper while getting to the rim at will. Against Washington, Pondexter shot 5-12 from the field, but got to the line 12 times putting in 10 of the attempts. The Liberty sit at the 4-seed and are fighting to hold on to the last spot, holding a half game lead against the Mystics. If the Liberty are to make the playoffs and make a deep run, Pondexter will be lead the charge.

Moore has stepped it up across the board in offensively and defensively for the Lynx. The smooth wing is averaging 17 points and 6 rebounds, yet still many were expecting more from Maya this year. All of the physical tools are there, but sharing the ball with two other explosive players in Lindsey Whalen and Seimone Augustus hinder us from seeing her on attack mode all night long. Moore is content with sharing the load, which has led to back-to-back finals appearances.

Charles has stepped it up a tick offensively this year and on the glass, averaging 19 points and 11 rebounds per game. Unfortunately for Sun fans, this hasn’t led to nearly as many wins as it did last year. Charles’ biggest step back has been her shooting percentages, as she went from shooting 48 percent last year (in an MVP season) to 41 percent this year. The good news for Connecticut is that there is plenty of basketball left to be played, and they only sit two games out of the last playoff spot.