WNBA: On The Rise 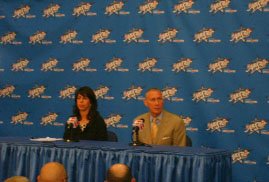 In its second decade, the WNBA continues to accomplish milestone after milestone. The league has reached an eight year agreement with ESPN to have ABC, ESPN, and ESPN 2 televise games throughout the 2016 season. The agreement was announced during the 2007 All-Star Game by the WNBA President, Donna Orender and ESPN Executive Vice President of Content, John Skipper. The agreement extends the relationship to 20 seasons. ESPN began with the league in 1997, its inaugural season.

This is a major breakthrough for women’s sports because there in no female sport in history to ever have a television deal of this magnitude. “It demonstrates an incredible amount of commitment to the WNBA, by our partners at ESPN. They have not only shown commitment to the league but to women’s sports in general. This will allow us to have a 20 year relationship and I look forward to the nine more years”, said Donna with a koolaid smile and look of relief. Mr. Skipper immediately chimed in saying “We are thrilled to continue to be the WNBA’s media partner. This is an increased commitment from ESPN and ABC. We believe in the future of this league. We want to be a leader in women’s sports as a whole. We will work real hard to continue to grow the WNBA.”

The revenue will be shared throughout the league and distributed accordingly. The amount was not disclosed to the public. When asked by a journalist about how the revenue will be shared with the player, the room got quiet but Donna stated, “We are in talks with the teams and players union to prepare for the reopening of the CBA. We will come to an agreement in the near future.” I must say she handled that question very well.

Going back to that CBA article I wrote had me feeling like a few people wanted and expected me to ask a question but I didn’t. This wasn’t the time nor the place to stir up controversy. This was a great moment in women’s basketball and a major move on behalf of ESPN. The All-Star Game was a success, the league is in a state of financial security, more jobs will be created, and little girls all across the globe can aspire to be a WNBA player. Its great to see all of that pioneering pay off.

Here’s a link to the breakdown of the WNBA television partnership with ESPN:

Thank you ESPN for believing in us and to everyone who has been waiting to exhale, I’ll say this, One – Two – Three  breathe………………….