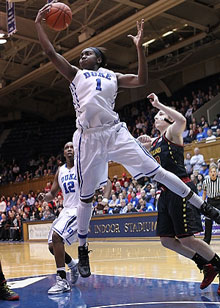 Nine-hundred may be just another number to many, but to Vivian Stringer, 900 holds a lot of weight.

The journey to 900 wins has been a great one for Coach Stringer. A renowned recruiting guru in New Jersey, she has been a force in putting Rutgers basketball on the map. During her tenure, Stringer has coached players like Cappie Pondexter, Essence Carson, Epiphanny Prince and many more athletes who have went on to promising careers in the WNBA.

It was a historical win for the Rutgers program and for Stringer, who joins Pat Summit, Jody Conradt and Sylvia Hatchell as the only coaches to reach 900 wins.

While Rutgers may be 15-12 on the season and fighting for a Big Dance bid, this is without a doubt a reason to celebrate for the Scarlet Knights.

Brittney Griner scored 15 points while tying her season-high 15 rebounds and blocked 7 shots to lead the Bears to their 25th straight victory Monday night against Oklahoma. Griner also passed former UConn wing Maya Moore as the fourth all-time leading scorer in women’s basketball. Next game up for Baylor is against a solid West Virginia team that sits at 17-10 on the season.

The Irish were pushed to the limit by Syracuse last game, and found themselves down 15 at a point in the contest. Luckily for the Irish faithful, Notre Dame was able to claw back into the contest with 21 by Skylar Diggins in the first half. Diggins then called upon backcourt partner Kayla McBride to help shoulder some of the offensive load. “I went to KMac and told her, It’s all you, baby, because I was tired,” Diggins said. “I told her, You’re going to take us there.” McBride finished a career-high 25 in the contest, leading Notre Dame to victory, 79-68. The Irish backcourt will be tested again this week as UConn comes to town looking to avenge their loss earlier in conference play.

Despite the loss of Chelsea Gray to a season-ending injury, Duke has not skipped a beat since her departure. Last game the Blue Devils were able to beat Maryland 75-59, locking up the ACC regular-season title. It certainly is an honor to be the regular-season champion,” said Duke coach Joanne P. McCallie. “I think that’s the hardest one to win because it says a team has gone through a season—again, with injury or other things happening—and really been consistent. I think that’s really a special thing for our team.” Duke also has improved to 6-1 against ranked opponents, with their only loss coming by the hands of UConn.

UConn beat Pittsburgh 76-36 for its 28th straight victory against Pitt. Now the Huskies can focus their energy on possibly their biggest game of the season in an away game against Notre Dame. UConn will need all hands on deck to beat the Irish in South Bend, and luckily freshmen Breanna Stewart is playing some of her best ball right now. Stewart has 31 points in her last two games after scoring just 43 over the Huskies’ first six games in February. UConn will need Stewart to produce offensively against Notre Dame.

Chiney Ogwumike set a Stanford record this past week by recording her 52nd career double-double. She also broke a single-game record with 24 rebounds against Oregon. “It’s extremely surprising, because I don’t go into a game like, Oh, I’m going to go and break records!” Ogwumike said. “No, I go in and try to play to the best of my ability, honestly. But I have such great teammates that are so unselfish, that always look for me every play and put me in a good position. Even with their passes, they lead me to where I should be finishing.” Ogwumike also became the sixth Cardinal to have 1,000 points and 1,000 rebounds. The Cardinal sit at 15-1 in conference play, and will need California to slip in the last two games to have a chance at the conference title.

Cal was able to win a nail-biter against Oregon State, 58-56. The Bears found their backs against the wall at half, heading into the locker room down 30-18. Senior Layshia Clarendon put the team on her back in the second half with 18 of her 26 points coming late in the game. “I rode Layshia like this was her senior year in high school and I was going to have her [take] 50 shots,” coach Lindsay Gottlieb said after Cal’s biggest comeback of the season. “The coaches on the bench were literally in my ear, ‘Every single thing we have, run it to Layshia.’ We obviously made a conscious decision to go through her.” With wins against Washington and Washington State, Cal can win its first conference title.

Arkansas pushed the Vols to the limit but Tennessee surged in the second half with a 60-54 win. Tennessee was able to seize control of slugfest in the second half. This was definitely a battle of the defenses, as both teams shot under 35 percent from the field in the game. The SEC’s leading scorer was the one of the rare few to find their groove in the game with 18 point in the contest. Tennessee is currently riding a 5 game winning streak and sits atop SEC standings.

Penn State was able to clinch at least a share of the Big Ten conference title with a victory against Michigan 68-57. If Penn State beats Minnesota tonight it will lock up the conference title outright. The senior class will go out with a 14-0 home record, which is quite an accomplishment.

Kentucky got out to a slow start against LSU and was unable to find their footing losing 72-77 against the Tigers. Reigning SEC Player of the Year A’dia Mathies was steady with 20 points and 6 rebounds in the game, but the rest of the team was having trouble finding their stroke offensively in the away game. Kentucky raps up the season with a tough home game against Tennessee, which could decide who is the regular season conference champion.

Maryland was unable to slow down Duke offensively, losing 75-59. Senior forward Tianna Hawkins was effective in the game with 16 points and 9 rebounds, but didn’t get much help from the role players in the game. Duke may have clinched the regular-season conference title, but Maryland will look to seek redemption in conference tournament play.

McBride was sensational in the second half against 22nd ranked Syracuse. The shooting guard dropped a career-high 25 points helping the Irish seal a second half comeback.

Liz Williams was a force down low against Maryland with 16 points and 7 rebounds as Duke clinched the regular season ACC title.

UConn will be looking to beat one of the few teams that has been dominant against them in head-to-head matchups this week. The Irish have won five out of the last six meetings. Notre Dame has a hot backcourt right now, with Skylar Diggins notching a triple-double against DePaul and Kayla McBride posting a career-high 25 last week. UConn will need freshmen Breanna Stewart to be a force in this tough away game.