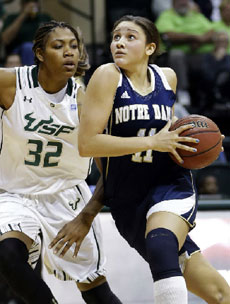 Notre Dame needed this victory. Everyone knew they have the talent to beat the mid-level opponents, but in order to be an elite team, you have to beat elite teams. Despite playing in Storrs, the Fighting Irish asserted their will and shocked many on national television, beating undefeated No. 1-ranked UConn 73-72.

Three days later, the same Notre Dame team faced unranked South Florida and couldn’t get right. Shots weren’t falling, players were out of sync on defensive side of the floor, and Irish fans were tearing their hair out as they watched this game. The Fighting Irish turned the ball over 15 times and needed overtime to beat the unranked Bulls, 75-71. Which leads me to ask this question: Will the real Notre Dame please stand up?

Coach Muffet McGraw says the team is still a work in progress. “Last year, we had a veteran team. We came out every game; I knew what we were going to do. We were going to be ready every game, and we were never going to take anyone lightly, and not let the thrill of a big game get to us,” McGraw added. “This team’s still young, so we’re still not where we need to be, I think, maturity-wise. And really, even with the veterans, I’m not sure that they came out ready. Hopefully, it was a really good learning lesson for us.”

This may make seeding the Irish one of the toughest choices come March. With so many underclassmen playing major minutes, it will take time for things to fall into place consistently. Time will tell us if the Irish are an elite team, or if they have the Huskies’ number.

Baylor reclaims the No. 1 spot in the rankings with double-digit victories against two top-25 opponents this week. The Bears mauled 13th-ranked Oklahoma State, 83-49, at home on Sunday. Baylor played stellar defense against a Cowgirls team that was ranked third in the country, posting 85 points per game this season. Brooklyn Pope continues to have a solid season, as she scored 18 points and pulled down 4 rebounds in the contest. Baylor plays another top-25 team next in 17th-ranked Kansas on Sunday.

Duke hasn’t played the toughest schedule out of the top-five teams on the list, but they are without a doubt one of the most talented teams in the country. The Blue Devils have done their job, which is to beat the teams people expect them to beat. Duke is currently riding a 13-game winning streak, and are 3-0 in conference play. Their most recent victory came against Boston College, 90-53. Chelsea Gray continues to showcase her versatile skill set with a 18 points, 11 rebounds and 10 assists in the game. Her second career triple-double ties her with Dawn Staley for the conference record.

Notre Dame really needed this victory against UConn. The people who create the brackets were going to be locked into this matchup, and a loss in this one probably would’ve killed any chance of the Fighting Irish getting a No. 1 seed come March. Notre Dame stepped up to the plate and played an amazing game in Storrs, willing a nail biter, 73-72. We all know of Skylar Diggins and her talent, but the role players are beginning to emerge for the Fighting Irish. Fab freshmen Jewell Loyd and Michaela Mabrey both shot the ball well against UConn and show great promise for the future.

The Huskies did not bring their “A” game against Notre Dame last week, and the Fighting Irish made them pay, stealing a close game on the Huskies home court. UConn seemed to be suffering from the blues as well in last night’s game against Georgetown. Despite holding a 15-point lead, they were in big time foul trouble and turned the ball over 11 times. “Right after the opening tip, it got sloppy,” said coach Geno Auriemma. “The first five possessions were a disaster, I thought. Things that I’m just not accustomed to. I was actually dumfounded. I had no idea that I could ever see some of the things that I saw in those first five minutes of the first half, and it kind of set the tone.” Kelly Faris’ hot shooting was a key factor in helping UConn secure the victory. Faris knocked down four three pointers, but also was stellar on defense with five steals and two blocks.

Kentucky continues to ride this hot streak, posting their 12th-straight victory against Alabama, 87-70. Denesha Stallworth had 19 points and 10 rebounds in the contest. Reigning SEC Player of the Year A’dia Mathies has found her shooting stroke as of late, with 20 points against Florida and 17 against Alabama. The timing couldn’t be better as they will need her on the top of her game as they head deep into conference play.

Stanford has found its footing again with victories against two top-25 teams in the past week. The first came against new Pac-12 member Colorado, 57-40. Chiney Ogwumike continues to show why she is the best player in the conference with 20 points and 11 rebounds in the contest. Despite being down at half, the Cardinal were able to zone out the raucous crowd at the Haas Pavilion and beat seventh-ranked California, 62-53.

The Volunteers continue to take steps forward with their most recent victory against 10th-ranked Georgia, 79-66. Bashaara Graves scored a career-high 23 points and pulled down 8 rebounds in the contest. The Vols continue to dominate at home against the Bulldogs, as they have not won in Tennessee since 1996. Tennessee will look to continue the three-game winning streak against Missouri today at 8 p.m. EST.

The Golden Bears had Stanford on the ropes, but lost control in the second half against the Cardinal, losing, 62-53. The Bears did win a tough victory against Colorado, 53-49, but will need to find a way to beat the elite teams in order to garner a top seed come Tourney time. California has a chance to redeem themselves and bolster their key victory list next game as they play Stanford again.

Penn State continues to play good basketball, as they are currently on a six-game winning streak. The offense stayed explosive against a stingy Michigan State defense, which was ranked second in the NCAA. Coach Washington does a great job at maximizing the talent of the dynamic backcourt of Alex Bentley and Maggie Lucas, which will make them a tough out in the big dance.

North Carolina is playing great team basketball right now on their eight-game winning streak. Their most recent victory came against one of the nations top-10 teams in Maryland. Despite the Tar Heels inability to find an answer down low for Tianna Hawkins, UNC still gutted out a tough victory, 60-57. The next game will come against in state rivals NC-State, so expect this to be a physical, passionate game.

Achonwa was a beast down low, battling all game in the interior against UConn last game. Natalie’s 10 points and 11 rebounds gave the Fighting Irish balance and kept the Huskies honest, which was a key factor in the game. Achonwa followed up that game with a 20-point effort against South Florida.

Tierra was a steady force in a big week for the Tar Heel program. Against then eighth-ranked Maryland, Ruffin-Pratt had 13 points, 6 rebounds, 5 assists and a game-sealing block to preserve the upset against Maryland.

GAME OF THE WEEK: California vs Stanford

Stanford found a way to overcome the energy of California in an away game, and the Bears will need to do the same in order to beat the Cardinal. Ogwumike was relentless in the last game with 26 points in contest. The Bears will have to find a way to get the ball out of her hands and force other players to beat them in order to have a chance to win.