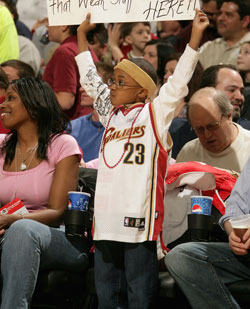 The final numbers are in for jersey and merchandise sales.

Sometimes good hoops markets push the players (Nate Robinson, Ray Allen, Pau Gasol); other times superstars push the markets (Pistons, Hornets, Heat). Kevin Garnett fell the hardest from last January’s returns, and it looks like he’ll slide out of the top five come next season. Gasol made the largest jump (No. 9 to No. 6) since January’s early returns. Dwyane Wade’s jersey was a success across the country as he led the League in scoring. Robinson, already benefitting from an eager New York fan base and Manhattan NBA Store, jumped ahead two spots following his Kyrpto-Nate dunk contest win.

As usual, when superstars are traded or change numbers, merchandise sales spike. The only such transaction this season occurred when the Nuggets traded Allen Iverson to the Pistons. Detroit saw a boom in national merchandise sales, but have since came back down to earth, falling two spots since January. With Iverson as good as gone, the Pistons may fall off the top 10 list altogether next year.

Clearly, everything LeBron is hot right now, and should continue to grow next season. At what point will ‘Bron surpass Kobe for the No. 1 spot? The Lakers have the bigger fan base, but like the MVP award, LeBron could take another title from the Mamba in the very near future. It’s scary to even fathom how strong a LeBron Knick jersey would sell should he choose to pack his bags in 2010…

Jersey sales increased 7 percent over last year at the NBA Store and NBAStore.com combined. Not bad at all.