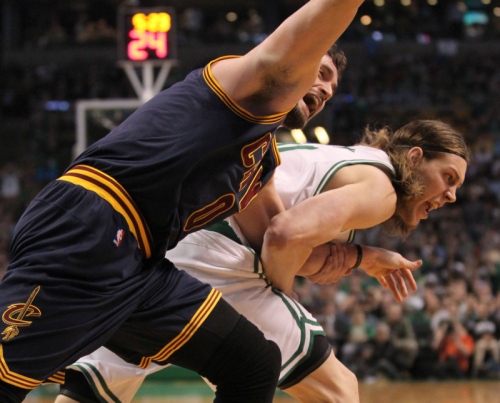 The Cleveland Cavaliers lost Kevin Love to a left shoulder injury Sunday, as they put the finishing touches on a four-game sweep of the Boston Celtics.

Love, who averaged 18.3 points in the first three games of the first round series, thinks Celtics forward Kelly Olynyk intentionally tried to injure him during a rebound battle.

Kevin Love says he dislocated his left shoulder and will be reevaluated in Cleveland. Says he thinks Kelly Olynyk did it on purpose.

Nothing will be known for sure until MRI but word within Cavs team tonight is Kevin Love likely out a minimum of 2 weeks.

An understandably angry Love is looking for “swift” justice from the NBA.

“I thought it was a bush-league play,” Love said after the game while wearing a sling. “I have no doubt in my mind that he did it on purpose,” Love said. “Olynyk was in a compromising position, had no chance to get the ball, and it was just too bad that he would go to those lengths to take somebody out of a game.”

Boston coach Brad Stevens didn’t think Olynyk hurt Love on purpose. […] “That’s not the type of person he is,” Stevens said. “I hope Kevin’s OK to play, whenever they play next, because you want everybody out there to finish the game.”

Love said he intends on returning to the playoffs this season and wants the NBA to review the play. […] “Oh, the league will take a look at it,” he said, “and it better be swift and just.”