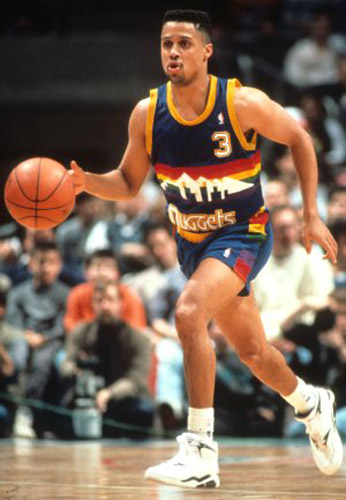 Shaquille O’Neal’s larger-than-life persona followed him wherever he went during his colorful 19-year odyssey in the NBA.

But even before he joined the Orlando Magic in 1992, the 216-cm giant had established himself as a powerful force in the Southeastern Conference during his three seasons at Louisiana State.

Former LSU teammate and Kyoto Hannaryz guard Mahmoud Abdul-Rauf recalls Shaq’s intense zest for life in those days and the budding star’s unstoppable desire to leave his mark on and off the court.

“Of course people will remember him for different things,” Abdul-Rauf told The Japan Times. “But what stands out to me, especially, in his younger years is the energy and tenacity he approached the game with.”

Abdul-Rauf went by his given name (Chris Jackson) then and played one college season with Shaq before being selected as the No. 3 pick in the 1990 NBA Draft.

“I remember when we were teammates at LSU he said that he would be the first player to have an $80 million contract,” the highest-profile foreign player in bj-league history added. “He exceeded that.”

After four seasons with the Magic, O’Neal agreed to a seven-year, $121 million contract with the Los Angeles Lakers on July 18, 1996. And the rest is history, including his 1,207 regular-season games, 216 playoff appearances, three championship seasons with the Lakers and another title with the Miami Heat in 2006. He logged 41,907 minutes in regular-season games and always commanded big attention from defenders of all shapes and sizes.

Despite O’Neal’s 28,596 career points and goofy persona, wide assortment of nicknames and memorable one-liners, Abdul-Rauf remembers Shaq’s unbridled determination and intense focus to succeed as being trademarks of his basketball career.

“What stood out to me more than anything during those days was that he played with a chip on his shoulder,” Abdul-Rauf said, analyzing the foundation period of Shaq’s career. “He always had something to prove. The way we all should approach the game.

“He was a mammoth of a player. But sadly I believe he also will be known for mostly being able to bulldoze his way into scoring.”

Indeed, dunks — and lots of them — were expected whenever Shaq had the ball in his hands with a chance to score at the offensive end. But mobility and quickness for a man his size (147 kg is his current weight listed on NBA.com) were also factors that he didn’t fully exploit during a Hall of Fame career.

The fact that he missed nearly half of his free-throw attempts (5,935-for-11,252, or 52.7 percent) during his 19-season career warranted the criticism it received. He took at least 471 fouls shots in 15 seasons, so several thousand points were lost due to Shaq’s inability and unwillingness to elevate this aspect of his game.

“He never really developed a low mid-range game, which I believe could have made the game easier for him throughout his career and made it less demanding on his body,” Abdul-Rauf said. “And his free throws never significantly improved, which could have done the same. But despite all of those things he was still able to remarkably dominate for a long amount of time.”

Consider this: The 15-time All-Star averaged 20 or more points in each of his first 14 seasons in the league. A remarkable stretch in any era.

“He was a likable guy by many and I hope his retirement years bring him wisdom and happiness,” Abdul-Rauf concluded.