Agent: Klay Thompson is the Best Two-Way Shooting Guard in the NBA 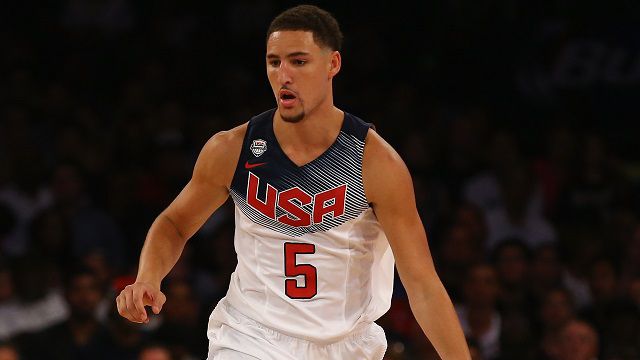 Expectations continue to get raised for Golden State Warriors shooting guard Klay Thompson. With a gold medal having been added to his résumé, Thompson is looking to have yet another breakout season.

Thompson’s agent Billy Duffy also wants to ensure his client gets paid max dollars – the 24-year old will be a restricted free agent next summer if a deal can’t be worked out by Oct.31 – and is selling the idea that Klay is the premiere two-way shooting guard in the L. (James Harden won’t be happy reading this.) Per USA Today:

“I don’t want (Los Angeles Lakers star) Kobe Bryant to go crazy, but there’s some uncertainty as to who he is right now (because of injuries that limited him to six games last season),” Duffy said. “But I think Klay Thompson right now is the top two-way, two-guard in basketball. I think when you look at his body of work, when you look at what he accomplished guarding point guards on a regular basis (last season), I think it’s pretty clear.”

“I’ve been telling him (he’s the best two-way shooting guard) for a couple of years now,” said Mychal Thompson, who has the unique distinction of being on both sides of the argument as Klay’s father and an ex-Laker and longtime commentator for Bryant’s team. “Everybody knows that he can score, but I always told him I’m so proud of how he takes so much pride in defense as he does with scoring. […] That backcourt is special. You don’t break that up. He and Steph (Curry), they are a great combination, like Laurel and Hardy, Abbott & Costello, Sanford & Son. They’re perfect together. … I expect them to be together another 10 years. I’d be shocked if they’re not.”

“We love Klay,” Warriors owner Joe Lacob said in an e-mail. “He is clearly an integral part of our team and our future. I remember sitting courtside at Stanford Pac-12 games watching Klay at (Washington State) for three years. I thought he could be a prototype big shooting guard in the NBA and we targeted him in the draft and were ecstatic to be able to draft him at (No.) 11 in the first round. […] We traded an excellent guard freeing up a starting spot for him and, as is known, despite many requests from other teams over the last few years, we have continued to bet on his continued development. We are very proud that he is a Warrior and also of his major contribution on this year’s USA Basketball team. We are looking forward to a great year for Klay, the Splash Brothers and the Warriors.”