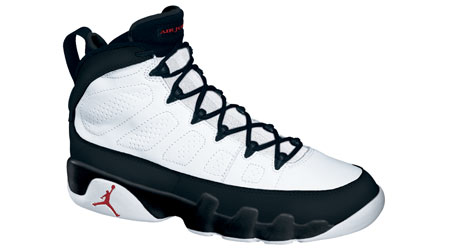 The announcement came on October 6, 1993: Michael Jordan, the greatest player in the game, was retiring from the NBA at the age of 30. The NBA would go on, of course—as would Air Jordan.
The Air Jordan IX, of course, was fully designed and ready to go by the time Jordan announced his retirement—it actually released in stores in November of 1993. And it was a vast improvement over its predecessor. The straps disappeared and the IX was lighter and cooler, featuring wide-spread lace loops and a mostly mesh tongue. The outsole was inscribed with words and phrases in various languages, emphasizing Jordan’s global appeal.
And since MJ wasn’t in the League anymore, the IX was the first Air Jordan to be worn by other NBA athletes in their own team’s colorways—most notably Latrell Sprewell of the Golden State Warriors. Jordan wore them, too, of course—only his were cleated.