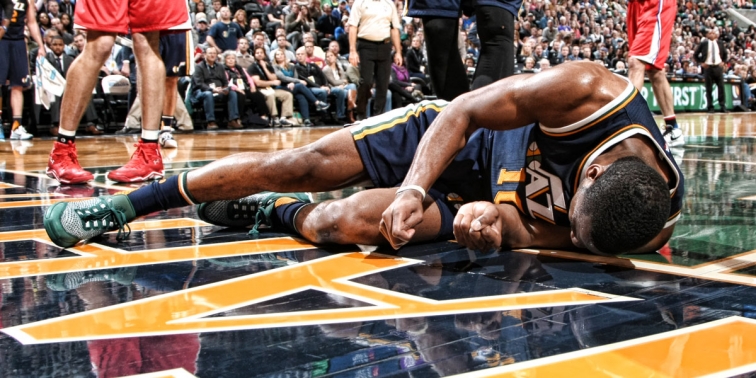 The Utah Jazz announced Tuesday that guard Alec Burks will go under the knife to repair his fractured left fibula.

Burks was hurt after a hard fall last weekend in a loss to the visiting LA Clippers.

The Jazz inked the 24-year-old to a four-year, $42 million deal last October.

After further evaluation, Burks (6-6, 211, Colorado) has elected to undergo surgery on his fractured left fibula. Burks opted for the procedure in an effort to expedite and assure the healing process. The surgery will be performed Tuesday in Salt Lake City by ankle and foot specialist Dr. Charles L. Saltzman, the chair of the department of orthopaedics at University of Utah Health Care.

Burks will remain in Salt Lake City to begin his rehabilitation, and will then accompany the team on road trips once he is cleared to travel. Further updates will be provided when appropriate.

At the time of his injury, Burks was one of three players to have appeared in every game this season for the Jazz. The fifth-year guard is averaging a career-high 14.3 points (third on the team) on a career-best 38.7 percent three-point shooting, with 3.6 rebounds and 2.1 assists in 27.1 minutes in 28 games (three starts). His 14.4 points per game as a reserve rank third in the NBA.