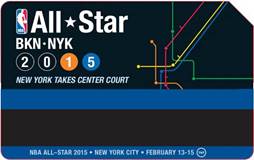 Although the cost of a ride on the NYC subways is rising faster than the Nets’ payroll, the MTA has finally done something right. With the All-Star game tipping off at Madison Square Garden on February 15, the MTA has launched limited-edition MetroCards celebrating the All-Star Game.

The All-Star Game logo celebrates the New York City Transit subway map, and also uses the system’s iconic signage. The NBA and MTA will give out 600,000 cards at various subway and bus stations throughout the city. This isn’t the first time MetroCards have been used to advertise sports as the Brooklyn Nets launched the 2014-15 season with a branded fare card, and the New York/New Jersey Super Bowl Host Committee commemorated Super Bowl XLVIII last year with a series of four different MetroCard designs.

This All-Star Game card includes the Knicks and Nets, as orange and blue and black and white are used in the numbers on the front. Though when you think about how off-track the seasons have gone for the Knicks and Nets, maybe it would have been best to pick a different color scheme for the subways?