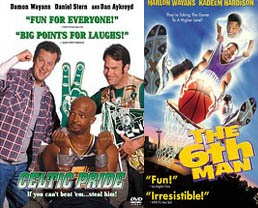 It’s not often (at least not often enough) that basketball flicks get play on the premiere movie channels. The Basketball Diaries gets some love sometimes, as does Love & Basketball, but those are more just movies that happen to have the word “basketball” in the title. Where are the epics? Where’s White Men Can’t Jump? Where’s Hoosiers? Where’s Hoop Dreams? Where’s Blue Chips, for God’s sake?

Then tonight, scrolling through titles, I saw it. They started after 3 a.m., mind you, but they were on the schedule nonetheless. Two basketball movies AT THE

(On a side note, the NBA actually signed off on Celtic Pride, I guess—seeing that they used real teams and uniforms. I’d love to hear David Stern explain that one sometime.)
I REALLY need to get LeaguePass.