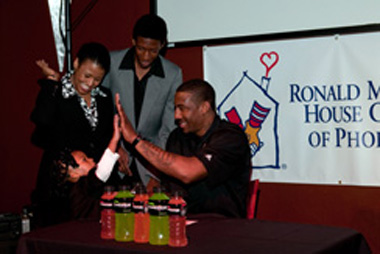 Amar’e Stoudemire has been looking forward to this weekend since it was announced. He signed up for parties, charity events and even signed up to do a blog for us, all out of enthusiasm for a weekend he rightly considered himself an ambassador for (Shaq has been amazing all weekend, too, but it was a reach to think he’d be here; Amar’e was a lock all year). It should’ve been a great weekend for Amar’e (and personally, I’m sure it has been), but as this article explains, it has to have been a drag professionally.

Annoying enough he has to listen to all the Terry Porter stuff, but to be the subject to trades himself, this weekend, is in pretty poor taste. I realize that if the Suns want to remake their team and the trade deadline days away, it was somewhat inevitable, but I think Kerr and Sarver could have done a nicer job.

Amar’e’s big charity push started Friday morning with a brunch held at Stoudemire’s Restaurant for the Phoenix Ronald McDonald House that I attended. The brunch found Amar’e in great form, cracking jokes with teammate Alando Tucker, taking questions and generally being a great ambassador for the House. Guests paid $125 to attend, and then additional money was raised through a silent auction that featured great All-Star-themed items acquired through Amar’e’s obvious juice with the game’s best players.

As the brunch wound down I chatted with Nancy Roach, the Executive Director of Ronald McDonald House Charities of Phoenix. She couldn’t wipe the smile off her face. “This is a new relationship we have with Amar’e, and we’re so happy about it,” she said. “He’s been aware of Ronald McDonald House since he visited one when he played in the McDonald’s Game in New York, but this partnership is new. People perceive great athletes as very cool, and if you have one endorse your cause, it’s a big help. A public event like this is a giant positive.”

I couldn’t tell how much of a basketball fan Roach is, but she clearly knew that Amar’e has been in the news regarding possibly being shipped out of town. Willing to take one for the RMHC Team, so to speak, she didn’t seem fazed. “All the Houses around the country are run separately, but we all endorse each other. So, if he were to get traded to another city he could easily work with the Ronald McDonald House in that city.”

This event was Friday morning. Amar’e then went through the media availability Friday afternoon, the partying Friday night, and the media and practice time yesterday morning before embarking on another charitable venture. I wasn’t able to make the second event I’m referring to, but it was a skills clinic at a local school where he teamed with Nike to share “insights, tips and details about the grassroots support that helped him reach the NBA,” according to Nike. He and Nike also teamed up to donate money to the local Native American community through the Nike-supported  Let Me Play on Native Lands Fund.

You want to mock the way Amar’e Stoudemire plays defense? Okay. Just don’t talk any junk about the way he conducted himself this weekend. As Roach said to me, “He’s a very gracious individual with a great heart. He understands he has a special opportunity.”

Too bad the Suns were so bent on overshadowing him all weekend.