And Then There Was One… 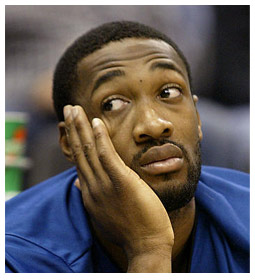 Two weeks ago while I was in Vegas, knowing that Team USA had to make two cuts, I predicted the players to be let go would be Gilbert Arenas and Bruce Bowen. I predicted it twice, actually, here and here.) I had no inside information about this, it was a gut feeling developed solely from watching Team USA practice and play exhibition games. We all know how terrific Gilbert is within the context of what the Wizards do, but he really was a visibly odd fit in Coach K‘s system. (And I love how I’ve since seen, even today, it written elsewhere that these were the two most likely guys to go. You think? Where’d you read that?)

Anyway, today it was announced that Gilbert has suffered a “groin strain” and will be withdrawing from the team. Hmm…

For the sake of Wizards fans out there, I hope he isn’t badly hurt, because if a “strained groin” is enough to keep him out of the next three weeks of action, it must be a relatively serious injury. I think the more likely scenario is that they all realized Gilbert wasn’t going to fit with the team, at least not this summer, and they found a way for Gilbert to leave with everyone’s dignity intact.

Who’s next? They’ve got one more exhibition (late tonight), and then they’ve got to dumb another player. I still think Bowen is the most logical suspect, but again, I wouldn’t be surprised it ends up being Chris Bosh, who like Gilbert has just looked out of sync thus far.