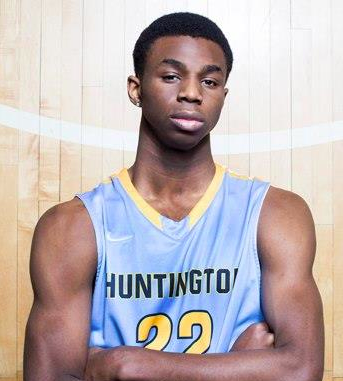 The Decision finally happened, except this one wasn’t televised. The most talked about high school player since LeBron James made his college choice at about at 12:09pm today. It has sort of become a ritual of passage for top recruits to make their college announcement by holding press conferences that are usually televised on ESPNU or other networks. But when it was Wiggins’ turn, he handled it different. There were no television cameras, room full of reporters, or hats in front of him to choose from. Just teammates, friends and family. If you read our cover story on him in SLAM 167 then you already known he is different from the average five-star recruit.

“Andrew is not like the other guys,” Huntington Prep assistant coach David Meddings told SLAMonline over the phone about 30 minutes before Wiggins revealed his choice. “He’s humbled and a great kid. He wanted to share this moment with his family, coaches and teammates. It’s very Andrew like to be this tight fit and we wouldn’t have it any other way.”

As to how he was able to keep his choice from leaking in an era where bloggers seem to be ahead of it all: “He [did] not let anyone know so who knows when he made up his mind,” added Meddings.

The final list of suitors: Kentucky, Florida State, North Carolina and Kansas. Florida State was believed to have a very good chance all along since both of his parents attended and starred as athletes there. His mother, Marita Payne-Wiggins went on to win two Olympic medals for Canada in track, while his father, Mitchell, went on to play in the NBA–most notably for his years with the Houston Rockets.

Kentucky, who many have anointed as having the best in-coming freshman class in college basketball history, was also always in the mix. Come on, it’s John Calipari we’re talking about here. North Carolina always seemed like a great fit and the roster seemed to perfectly complement Wiggins. Plus, word was that Roy Williams had built a good relationship with him. Kansas seemed to have just of a good chance as the other three, but seemed to be the dark horse.

When it was time for the answer, Wiggins wanted to rock chalk as a Jayhawk. “He loved Bill Self and feels it was the best fit for him and future,” said Meddings moments after the announcement. “We are proud of him.”

Coincidentally, the day we announced the Wiggins cover on our website, I reached out to Mitchell to confirm his address so we could send him some copies of the new issue. He called me back that Tuesday night from the airport, having just gotten back from visiting Kansas with Andrew and Marita. He referred to the visit as going ‘well’ and ‘nice’. Who would have ever thought that it’d marked the start of Wiggins’ road to Kansas?