Another white Suns player for MVP 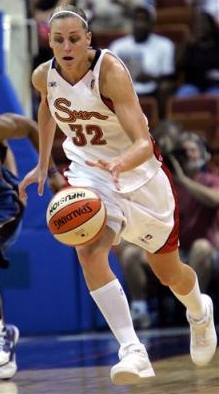 The heated “Is it racist for Steve Nash to win the MVP” discussion came and went, and now another white player for the Suns is the frontrunner in an MVP race. Katie Douglas of the Connecticut Sun. Outrage! My race card is on the table!

Okay, what I meant to say by all of that is that it’s summer time and I’m writing an entry for our often overlooked “Womens” category. I took some liberties with that headline. Katie plays for the Sun, not the Suns. I do not know if that team name is a reference to the Mohegan Sun casino or the Native American tradition that inspired the design of Mohegan Sun. I like Foxwoods better myself, but that’s because it has a better theme song.

Believe it or not, Katie Douglas is my favorite women’s basketball player of all-time, and for a really stupid reason. You want me to explain further? Okay, since you asked.

Back in 2001, I was working for the worldwide follower as a production assistant, cutting highlight videos for whatever ESPN show needed them. One night, I wasn’t assigned a specific game, so I had to move around the highlight cave, waiting to fill-in and help out a fellow P.A. that might have to leave their assigned game to start cutting a highlight early. On this night, a co-worker named Katie O’Brien was working on a Purdue women’s b-ball game. The best player in that game was Purdue’s All-American Katie Douglas. To make a long story short, I confused the names Katie O’Brien and Katie Douglas many times that evening, to the point that it became a running joke for the rest of the week. I’m leaving out many many details which I find personally amusing, and if you’ve made it this far into this paragraph I applaud you. The thing is, if you’ve ever tried to live in Bristol, Connecticut, you know that you have to find humor in the smallest things to keep yourself sane.

Ever since that day, Katie Douglas has been my favorite women’s basketball player. I forgot about her for a while, but it’s good to see that she’s finally getting some recognition as the top player in her sport. Lisa Leslie? Come on, share the wealth.

Katie4MVP. Sure, she’s not as good as Lisa Leslie or Diana Taurasi and her nickname “KT” is about as uncreative as it gets. But I’m on the bandwagon anyways. She’s got good numbers across the board. Her team is winning. She makes players around her better. To finish this up in the corniest possible way: I’m not just talking trash. Her game is MVP like Steve Nash.

Ugh, I can’t believe I just wrote that.