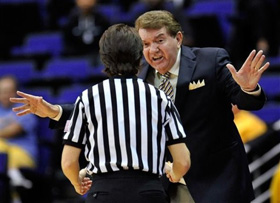 But that, of course, is exactly what basketball refs do. They are the bosses on the court, and they tell players, coaches and sometimes even fans precisely how to behave. They determine what is acceptable behavior and what is not, and they define the nature of a foul – which of course changes from game to game, quarter to quarter and minute to minute.

Naturally, this does not make them popular. They are authority, and they always win. They can send players to the bench with fouls, they can send coaches to the locker room with technicals, they can even send spectators to the parking lot. They are, in that way, sadly reminiscent of the boss at work, the bureaucrat in the IRS office, and the cop who just pulled over some poor sap who was going eight miles a

n hour above the speed limit.

So it’s not surprising that everyone delights in booing calls that go against the home team. And of course, those refs always favor the other side – for evidence, just ask fans of any sport if their teams get more calls than their opponents. In short, even though the refs are biased, the bias never balances out. Whoever a fan is rooting for always gets fewer whistles blown in her favor, and whoever the fan is rooting against always gets the breaks.

It does not take a genius to realize this is mathematically impossible. If UConn is playing Tennessee, both teams can’t be getting hammered by bad calls; and if Arizona State goes through the Pac-10 season with officials conspiring against them, those same officials can’t be meeting before the game to make sure that Washington never gets a call either.

A moment’s consideration makes it clear the refs aren’t really out to get anyone. They are busy trying to do their job as best they can, trying to please their supervisors so they can get more and better games, and they honestly don’t care about the outcome. (As Skip Caray, an old-time announcer once pointed out when he went from broadcasting Atlanta Hawks’ games to NBA teams he didn’t follow regularly: “It’s amazing how much better the officiating is when you don’t care who wins.”)

But still, fans, players and coaches gnash their teeth and whine about the refs. They are all convinced the officials are out to get them, sometimes personally, and they know the other team gets all the calls. So they yell. They gesticulate. They scream. They pound their feet on the floor. They put on a show, presumably hoping that will result in more calls going their way.

There is no evidence, though, that all the histrionics – and there are some very impressive displays, Oscar-worthy even – make any difference. In fact, the constant abuse heaped on officials actually only makes things worse. Consider: Everyone complains about the state of officiating, and wishes there were more good refs. But how many people want to deal with the abuse for very low pay? Not many. And every time one good official is driven out of the avocation by the mindless screaming of people who’ve never read a rule book, the quality of officiating goes down.

If fans, players and coaches really want better officiating, then the best move would be to scream less and encourage more, just as they do with the players on their team. Which leads to another point: Officials are part of the game, part of the

athletic experience, and they, like players and coaches, make mistakes. At the high school, the players aren’t very good, in absolute terms, and the coaches aren’t either. The fans are unsophisticated, for the most part, and many have only a rudimentary grasp of the rules of the game. So why would anyone expect the officials to be working at a higher level than those around them? Of course, high school refs aren’t that good, which is why they’re working games with players and coaches who aren’t that good.

And that leads to the next question: Why, if mistakes by players and coaches are accepted as part of the flow of the game, can’t mistakes by the officials be accepted as well? Why are refs supposed to start out perfect, and then improve, when the apple of some fan’s eye, who just missed her fifth straight wideopen layup, is told to hang in there and keep working hard?

Another point: How many fans have read a rulebook cover to cover? How many players? How many coaches? How many of any group understand the positioning of refs on the court, and what each official is looking for at a given moment? How many have looked at a tape just to watch the officials, with a ref who understands the process?

In short, the guy 500 feet from the play whose knowledge of the rule book comes only from TV announcers who are hired for looks and a mellifluous voice probably doesn’t quite have the same perspective on a particular play as the trained official who’s standing five feet away.

So, again in short, shut up already. And that goes for players and coaches too. Screaming at the refs accomplishes nothing, except to drive good people away from the avocation, and occasionally to rattle weaker officials who will respond by making more bad calls than before.

After all, what good does it do? As John Mellencamp pointed out, authority’s always going to win anyway.

For more from Clay Kallam, and more about women’s basketball, go to Full Court Press.